“It’s rare that a documentary succeeds in completely overturning popular understanding, but that’s what the archaeologist Dr Jago Cooper accomplished.” Read on for the verdict on last night’s TV. 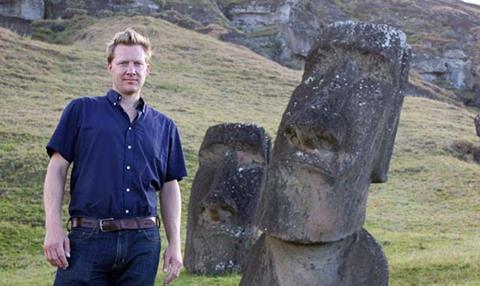 “The narrative of Easter Island: Mysteries of a Lost World was both comprehensible and comprehensive but felt oddly weighted. Given that most of us, I hazard a guess, were not aware of, let alone invested in, the original theory of Rapa Nui’s decline, the laborious construction of what was essentially a straw man made me wonder whether the running time could not have been reduced.”
Lucy Mangan, The Guardian

“It’s rare that a documentary succeeds in completely overturning popular understanding, but that’s what the archaeologist Dr Jago Cooper accomplished in his 90-minute film.”
Ellen E Jones, The Independent

“Dr Cooper’s alternative surmise looked plausible. He was aware he was destroying one metaphor for our world but took the trouble to replace it with another and more optimistic one.”
Andrew Billen, The Times

“The history of the Winter Olympics is so full of glamour and intrigue that a programme about it is always going to be interesting to a degree, but Snow meandered too widely across politics, glory days, war and petty rivalries to give real weight to any of his arguments.”
Charlotte Runcie, The Telegraph

“It is surely not the job of a documentary to preach solely to the converted but to gather in the mildly curious, some of the neutral and perhaps even the occasionally profoundly ignorant too, via a comprehensible narrative delivered with intelligence and verve. A bronze medal this time, I think.”
Lucy Mangan, The Guardian

“Harry Shearer played the disgraced US president with such perfectly matched tone and intonation (and such astonishing prosthetic jowls) that you really could have been watching Nixon himself. The first episode was like a cross between The Thick of It and a modern undercover film of MPs revealing their double-dealings.”
Charlotte Runcie, Daily Telegraph

“It is rightly billed as comedy. It is also right that it should be on Sky Arts: it truly is found art. Shearer is extraordinarily good as Nixon, nailing his growl yet, in his gestures, as he has said, emphasising an effeminate delicacy.”
Andrew Billen, The Times

“The fashion for adding derivative, unimaginative tattoos to arms, buttocks and most other bits is baffling. It’s not art, just fourth-rate graffiti. The sight of Grant twitching in pain as a surgeon inserted a plastic cap over his eyeball and started to laser off the ink ought to deter anyone.”
Christopher Stevens, Daily Mail