TV Critics: Fox Wars; The Great British Bake Off; Smash and Grab – the Story of the Pink Panthers

“The lesson of Fox Wars was that while urban wildlife is interesting, the antics of human beings are completely fascinating.” Read on for the verdict on last night’s TV. 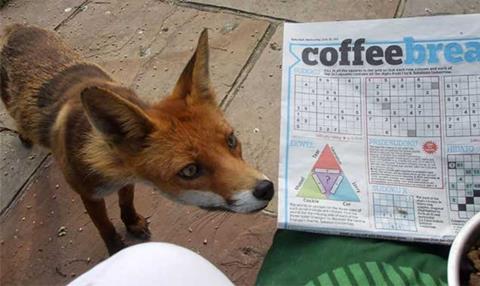 “This programme wasn’t really about foxes. They were just there to be petted or shot at. It was people’s relationships with them that made this documentary so charming.”
Sam Wollaston, The Guardian

“It’s tempting to dismiss the people in this programme as wealthy retirees with too much time on their hands, but that didn’t make it any less revealing.”
Ellen E Jones, The Independent

“The lesson of Fox Wars was that while urban wildlife is interesting, the antics of human beings are completely fascinating.”
Christopher Stevens, Daily Mail

“I’d always assumed that attitudes towards red Reynard ran roughly along class lines: the upper classes hunt them, the middle classes romanticise them and the working classes see them as pests. Fox Wars largely confirmed my sweeping generalisation, which is always pleasing.”
Michael Hogan, The Telegraph

“City people generally didn’t come out of this investigation too well. In Newport a woman called Janet spoke darkly of electrifying her fences to keep the foxes away… It was obvious to me whose viewpoint we viewers were meant to side with.”
Matt Baylis, Daily Express

“Did I say this was a perfectly good little programme? It was better than that, because it cared less about the foxes than the people, pro and anti, who cared about them.”
Andrew Billen, The Times

“The final itself was a bit of a disappointment, with both the pretzels and the wedding-cakes turning out underwhelming. But then GBBO has never really been about the cakes…With its good cop-bad cop judging and funster presenters, GBBO is basically much the same format as X Factor. A bit fluffier, but no more real.”
Sam Wollaston, The Guardian

“The show is a gentle, schoolmarmish admonishment to those brasher TV talent shows. They seem to believe that only humiliating contestants and exposing their private lives will keep the bloodthirsty TV audience happy. We’re much nicer than that really, and the proof is in the pudding.”
Ellen E Jones, The Independent

“The producers had allowed the challenges to be both difficult and unfamiliar. And the judges lobbed quite harsh criticisms at bakers who had clearly done their best. That sort of thing would never happen at, say, the final of The X Factor, when the judges ramp up the glory by telling everyone how great they are.”
Neil Midgley, The Telegraph

“In a tense final that saw all three bakers fumble their recipes at crucial moments, it was the children’s fashion designer Frances Quinn who was crowned Bake Off queen… But it’s Ruby Tandoh who has emerged with a real chance of a TV career… Bake Off might just have discovered the next Nigella.”
Christopher Stevens, Daily Mail

Smash and Grab – The Story of the Pink Panthers, BBC4

“This had one obvious problem: internationally wanted criminals aren’t usually keen to discuss their crimes on camera… In 20 years’ time, when statutes of limitation have expired and sentences have been served, perhaps a documentary-maker will come along and tell the real-life Ocean’s Eleven story that must be buried here somewhere. Until then, this was a mildly interesting history of the failure of European integration.”
Ellen E Jones, The Independent