TV Critics: Going Forward; The Truth About Dementia; At Home With The British

“The characters are glorious. This is humour with a heart.” 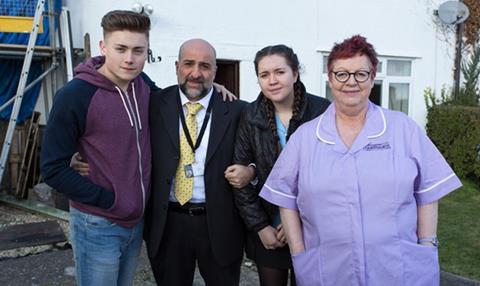 “Like its predecessor, this show has a lo-fi feel. The dialogue sounds improvised, and the footage is hand-held and over-exposed, as if it’s been filmed by a teenager with a smartphone. But the characters are glorious. This is humour with a heart.”
Christopher Stevens, Daily Mail

“It’s not that funny, for a comedy. But it is sharply observed, nicely performed, with credible dialogue, some of which is surely improvised. Plus it captures a hellish world where people come second to profit, a world of care that doesn’t care.”
Sam Wollaston, The Guardian

“It is a joy to have (Dame) Jo Brand back as Kim Wilde. I miss Vicki Pepperdine, Joanna Scanlan and Ricky Grover from Getting On, of course, but there is compensation in Omid Djalili as Kim’s husband and from his superior fellow chauffeur played by Tom Davis. The pair got the debut’s best dialogue.”
Andrew Billen, The Times

“Brand, a former psychiatric nurse, plays Kim to perfection. This was another comedy about broken Britain, but focusing not on those who toil inside a knackered state institution but the wider social fabric, privatised to buggery but somehow doddering on. Homelier and gentler and patchier than Getting On, it somehow lacks its asperity but also its poetry.”
Jasper Rees, The Telegraph

“It has a flavour of the old US sitcom Roseanne, ordinary folk forever getting knocked down, forever getting up with a joke. It’s got more heart than that, though. Behind the mirth, there’s a message. Even if you’re beaten, don’t join them.”
Matt Baylis, Daily Express

The Truth About Dementia, BBC1

“Watching celebrities as they receive their prognoses is a conceit pioneered by Michael ‘Everyman’ Mosley. I am not sure, however, if it is how I want television to go. Had Angela Rippon’s news been bad, would we have watched the tears roll down her cheeks as we ghoulishly recalled what a precise newsreader she had been? What next? All Star Celebrity Bupa Check-Ups?”
Andrew Billen, The Times

“This documentary was at its best when Angela was revealing her personal experiences of Alzheimer’s. She talked about her previous ignorance of the condition, even when her mum first fell ill. Simple illustrations like this are of much more practical use than gene tests and MRI scans for viewers who might be watching to compare the signs they’ve observed in their own loved ones.”
Christopher Stevens, Daily Mail

“Angela undergoes tests herself – cognitive, a brain scan, and finally a DNA test – to see if she’s showing any signs of dementia or has any extra risk of getting Alzheimer’s. The results: sharp as a whip, nothing abnormal, no extra risk, respectively. Phew.”
Sam Wollaston, The Guardian

“Some of the science in these films can be distancing. Not here. Because it attacks the mind the disease holds greater fear than other killers. This brisk tour of the facts lessened its terrors (if only slightly).”
Jasper Rees, The Telegraph

Dan Cruickshank: At Home With The British, BBC4

“The lanky, puppy-like Mr Cruickshank is a pleasure to watch on any subject. But on architectural history he’s on his true home turf. He was good on the things that stayed the same as well as the things that changed.”
Matt Baylis, Daily Express