“Apart from the odd draconian punishment and sixth-form bully, it all looked jolly nice.” Read on for the verdict on last night’s TV. 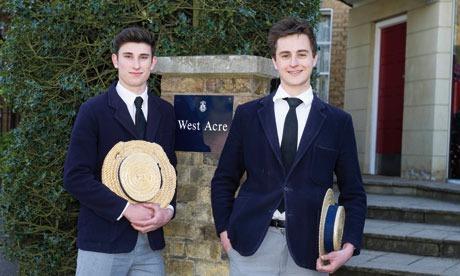 “Their documentary’s first episode was very disappointing half-term. Beyond a spirited performance by a rebel named Olly (he’ll get that doubled out of him), everyone was terribly nice and terribly dull. The series is not even original. Harrow let Carlton’s cameras in a dozen years ago.”
The Times, Andrew Billen

“Apart from the odd draconian punishment and sixth-form bully, it all looked jolly nice at Harrow. But then it would – for £30,000 a year.”
The Independent, Alice Jones

“Harrow came across as exactly what it is: a small pocket of privilege that is comfortabley riding out one of the deepest economic downturns of the past 100 years. I just can’t think what possessed the school to think it would be such a great idea to draw everyone’s attention to that fact.”
The Guardian, John Crace

“Harrow: A Very British School was gutless. This appeared to be a classic example of a documentary-maker depending on access that they just didn’t get.”
The Telegraph, Benji Wilson

“You don’t expect psychological profundity in what is essentially an entertaining romp, but a little character development wouldn’t go amiss. Instead Chandler’s character is now reduced to the snapping of an OCD wristband.”
The Times, Andrew Billen

“ITV have done very well to spin so many murders out of one London borough. There is still a hefty taste for the macabre in this, the first of three two-parters but it has also found a sense of humour and so, its groove. It now combines cryptic clues and whizzy, nocturnal London jump-cuts of Sherlock with the knitted bloodshed and archness of Midsomer Murders.”
The Independent, Alice Jones

“The first two series were good enough, but suffered slightly from the rather heavy-handed way their plots tried to shoehorn notorious Whitechapel crimes into a present-day narrative. The fourth series didn’t bother. Presumably the scriptwriters checked with Ripperologist Edward Buchan (Steve Pemberton) and concluded there weren’t any high-profile Whitechapel crimes left for them to include, so they had free rein to do what they wanted.”
The Guardian, John Crace

“It was all slick, mysterious, well played and suspenseful.”
Daily Express, Virginia Blackburn

“With admirable precision, Whitechapel managed to notch up just about every one of them, and so a series that is meant to make you have nightmares merely ended up giving me convulsions. It is a series pockmarked with those little high-speed linking sequences that look like a toddler has just grabbed the remote and is flicking between a specialist Death Metal channel and Ramsay’s Kitchen Nightmares.”
The Telegraph, Benji Wilson

“We hear a great deal about the failings of the NHS, so how very cheering it is to see it at its best, and it certainly was that here. How do people do these jobs? It would be quite beyond me.”
Daily Express, Virginia Blackburn