TV Critics: Heading Out; My New Hand; The Railway; Shameless

“If Perkins can keep the gags coming then this sitcom definitely has legs.” Read on for the verdict on last night’s TV. 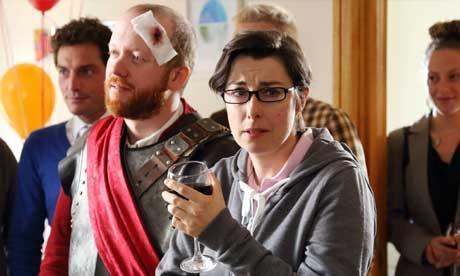 “First impressions weren’t bad… There’s an extended gag about the cat’s corpse that not only requires you to suspend your disbelief but to hang it from the neck until it’s dead. But more often than not the slightly wobbly construction is accompanied by sprightly writing… There’s also a nice twist in Sara’s male best friend – a furiously camp fuss-budget who isn’t actually gay – and a promising turn from Steve Oram as Sara’s work colleague. Not sure the chemistry is entirely right, but I’ll definitely give it a second date.”
Tom Sutcliffe, The Independent

“There were a few rather flabby moments in the middle – almost as if Perkins had lost her nerve and thought middle England couldn’t stomach a lesbian sitcom without a Benny Hill-style netball scene along with a crap 70s muzak soundtrack – but the start and the end were sharp and often extremely funny. If Perkins can keep the gags coming then this sitcom definitely has legs.”
John Crace, The Guardian

“Loveability alone will not take the Bake Off host into a second series. She has a strong cast, but what Perkins really needs is a collaborator on the script.”
Andrew Billen, The Times

“Licence payers’ money went on this drivel… What was wrong with this is what is wrong with an awful lot of modern British ‘comedy’: dull, politically correct, with dialogue that bears no similarity whatsoever to how anyone actually speaks. Good comedy must be grounded in reality, however farcical it gets, but this? Absolute dross.”
Virginia Blackburn, Daily Express

“As with so many medical documentaries, the skill and care of the hospital staff mixed with resilience and courage of the patients was inspiring, but this was a film that needed to be as much about ethics as pioneering microsurgery. And while the ethical questions weren’t avoided, they got a very gentle ride.”
John Crace, The Guardian

“Professor Kay appears rather touchy about the merits of this pioneering piece of surgery… [offering] a surprisingly aggressive defence of a procedure that is very costly and will leave patients on a lifetime of immuno-suppressant drugs (some of which can have serious side effects). The programme itself was – I’m sorry – a bit more even-handed, following a variety of candidates for transplant through to the first operation itself.”
Tom Sutcliffe, The Independent

“What this programme brings into focus is that railways are a metaphor for limbo. People go into suspended animation when they are in transit. They are not here, there or anywhere. They are simply between. Nor are they, apparently, even really themselves. Which is presumably why so many passengers think they have the right to be so unpleasant on trains.”
John Crace, The Guardian

“There remain some neatly anarchic touches but last night’s plot about Jamie’s paternity was, well, sentimental and unfunny. Shameless was a boom-time comedy about a class left to its own devices. Its era, and theirs, is over.”
Andrew Billen, The Times