‘We saw a first on television last night: science as presented by Mumsnet.” Read on for the verdict on last night’s TV. 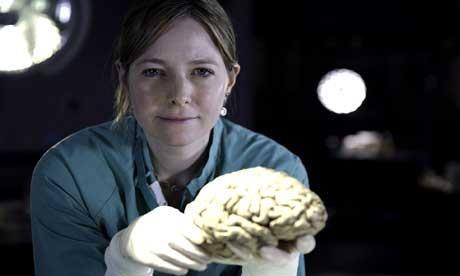 Horizon: What Makes Us Human?, BBC2

“Like quite a few Horizons recently, the ratio of padding to content here was wildly out of kilter. Watching these films is a bit like getting one of those Amazon deliveries in which a box the size of a steamer trunk arrives, only to disgorge huge quantities of styrofoam pellets and cardboard spacers and finally, virtually lost in the wrapping, the thing you ordered in the first place.”
Tom Sutcliffe, The Independent

“Professor Alice Roberts is expecting her second child. I don’t think I’ve ever seen anyone look so happy to be pregnant. She floats around, backlit by the sun and beaming, stroking her bump, marvelling at other babies and at the wonder of it all.”
Sam Wollaston, The Guardian

“A fascinating documentary on the nature of being human… Roberts shared new evidence from Harvard that female pelvis width is compensated for, when running and walking, by Marilyn Monroe’s hip wobble… Her presentation was, as always, clear and good humoured, but this time she had something fresh to say.”
Andrew Billen, The Times

“We saw a first on television last night: science as presented by Mumsnet. And what a nauseating spectacle it was… I’m sure Roberts is extremely clever and accomplished but she has done herself and the rest of her gender no service by presenting a programme riddled with such mawkish sentimentality. What were the producers thinking?”
Virginia Blackburn, Daily Express

“A probationary agent called Dorneget discovered that his tooth implant contained a listening device created by the prime suspect for a load of arson attacks, a fantastic plot twist that someone must have had a great deal of fun coming up with. There was a good back story, too, along with slick production values and great acting.”
Virginia Blackburn, Daily Express

“It was the ‘build a business from scratch’ task on The Apprentice which Lord Sugar always relishes because it gives him a chance to say ‘smellin’ what’s sellin’’ repeatedly and get all misty-eyed about his own humble roots in the East End, selling Amstrad E-m@ilers from the back of a van.”
Michael Hogan, The Telegraph

“The Apprentice is another exercise that requires the careful calibration of collective reward against self-interest… With two weeks to go, it is still hard to imagine Lord Sugar hearing the news he is impatient for: ‘Congratulations, it’s a business partner!’”
Andrew Billen, The Times

Shot for Going to School, BBC3

“The girls’ schools of Swat have been under sustained attack by the local Taliban and anyone who promotes education for women has become a target. The most high-profile of these is Malala Yousafzai, shot in the head for the scandalous impiety of wanting to improve herself… The mosque leader supplied a fine example of the kind of analytical intelligence a madrasah promotes by first regretting the attempted murder of Malala and then denying that it had ever taken place: ‘Where is the evidence that she was attacked?’ he said. Such people have to protect their children’s ignorance, you realised, because it’s the only soil in which their own unthinking piety can flourish.”
Tom Sutcliffe, The Independent

“There was something pleasingly stagey and old-fashioned about Dates. These short, sharp, two or three-handers were reminiscent of Play for Today or Tales of the Unexpected. Let’s hope this wasn’t a one-series stand.”
Michael Hogan, The Telegraph