“It’s an impressive experiment… deathly dull television, though.” Read on for the verdict on last night’s TV. 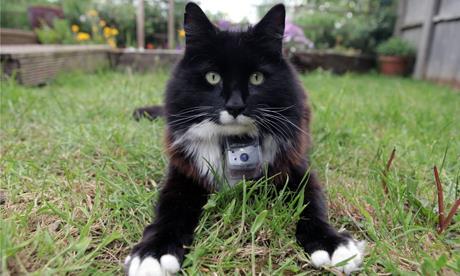 Horizon: The Secret Life of the Cat, BBC2

“Fifty cats were fitted with military-grade GPS trackers, and the more interesting of them were upgraded to cat-cams, in an endeavour to find out what happened once they’d gone through the cat-flap. Apparently, it’s ‘every owner’s dream’ to find this out. It isn’t mine, even though I like my cat, so the fact that I found this programme low on revelation and charm may say more about me than about it.”
Tom Sutcliffe, The Independent

“It’s an impressive experiment: 50 cats, almost the entire population of one Surrey village, are fitted with GPS collars and cameras, and the results are pored over, plotted and analysed. It’s deathly dull television, though.”
Sam Wollaston, The Guardian

“This cleverly crafted project elevated the humble pet into a wildcat worthy of a wildlife documentary… I can’t help but wonder how long the crew spent crouched in alleyways and on doorsteps to get the necessary shots, but the resulting footage was worth it… I don’t own a cat. In fact, I don’t even like them. But I loved this.”
Sarah Rainey, The Telegraph

“When a science programme has little to reveal, it explains in unnecessary detail its methodology. So it was here, but the eventual findings were moderately interesting.”
Andrew Billen, The Times

“Anne Marie and Martin’s old life is up for renewal and they’re going to get a new one, in exactly the same way as they’d get a new mortgage or new car insurance… It is all ridiculous, of course, even if it is oddly compelling. Because lives aren’t mortgages or car insurance policies; you can’t make decisions purely on box-ticking.”
Sam Wollaston, The Guardian

“On paper, it’s almost plausible. But if last night’s episode was anything to go by, this is a recipe for disaster (not to mention divorce and/or bankruptcy)… It was all a little too contrived to ring true - and left me feeling far from convinced the show did them any good. Carlton Hood also failed to impress: he lacked charisma and communicated through buzz words like ‘compare’ and ‘rational’.”
Sarah Rainey, The Telegraph

“The idea that new lives can be selected off the peg and slipped into with no more than some help from a personal shopper is clearly nonsensical, and no less nonsensical for the application of the so-called ‘science of choice’. Yet the wonderfully named Carlton Hood, former CEO of Confused.com, was such a gentle persuader and such a natural TV presence, that all things momentarily seemed possible, at least to Anne-Marie and Martin Killick.”
Andrew Billen, The Times

“Hood put them through a Priority Analysis Test to find out what really mattered to them, a dubiously scientific process that eventually revealed that Spending More Time with the Kids was at the top of their agenda… But whether this process had a point anyway was moot, since the future the couple eventually opted for seemed certain to ensure that they would be Spending Less Time with the Kids.”
Tom Sutcliffe, The Independent

“The weird, fascinating otherness of other people’s families has been a staple for TV documentary-makers ever since the BBC fly-on-the-wall series The Family charted the ups and downs of domestic life in Reading, Berkshire, in 1974. There’s more of the same formula in Happy Families but that doesn’t make it any less interesting.”
Matt Baylis, Daily Express

“The documentary demonstrated the truth behind much fictional hospital drama: patients are admitted on the edge of life, some going on to make near-miraculous recoveries while others seem to be fine and then suddenly plummet and fade away.”
Matt Baylis, Daily Express