“A soothing, mildly diverting way of passing the time.” Read on for the verdict on last night’s TV. 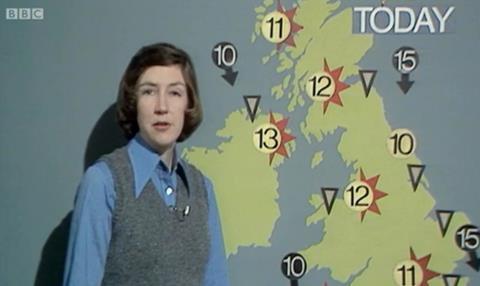 Hurricanes and Heatwaves: The Highs and Lows of British Weather, BBC4

“Like the weather forecast itself, it was a soothing, mildly diverting way of passing the time. Not too stimulating, not too interesting and sent you off to bed quite happy, and just a little bit wiser.”
Lucy Mangan, The Guardian

“A short history of weather forecasting with special reference to the BBC, there was much to enjoy. Unfortunately, Hurricanes and Heatwaves was blown off course and we visited Transport for London Lost Property Office’s umbrella collection and met a bride hoping for a sunny wedding day.”
Andrew Billen, The Times

“Hurricanes and Heatwaves traced the art and science of weather prediction, from Robert FitzRoy’s doomed attempts in the mid-19th century, through to satellite imaging and supercomputer-predicting today. It was less the story of changing weather than our changing relationship with it.”
Will Dean, The Independent

“This documentary, part of the excellent Timeshift series, charted the evolution of the weather forecast, from its invention by  Victorian scientist Robert Fitzroy — who got it wrong so often that he eventually felt compelled to kill himself, by way of apology. The first TV forecaster was  castigated by the Met Office for his amiable delivery. At least he didn’t do it like Jeremy Paxman, who thought such mundanities beneath his considerable  dignity.”
Christopher Stevens, Daily Mail

This Is Jinsy, Sky Atlantic

“This Is Jinsy is one of those weird British comedies, like The League of Gentleman and The Mighty Boosh, whereupon a first viewing, it seems inaccessibly strange but, given time, you come to embrace its eccentricities. It’s very silly, but very worth it.”
Will Dean, The Independent

“Only some of the silliness comes off, but I love it a little for its absurdist folk songs. Especially the one yesterday about vegetable tricks.”
Andrew Billen, The Times

“The programme flitted from subject to subject, story to story, without it ever amounting to anything in particular. You ended the programme feeling sadder but not much wiser.”
Lucy Mangan, The Guardian

“Last night, as Britain was mopping up after appalling storms, Midsomer St Claire was threatened by floods and the villagers were taking sanctuary in the parish church. Because the show is timeless, it seemed odd to have it topical.”
Christopher Stevens, Daily Mail

“Last night we met a man with stab wounds, a pair of young parents with a toddler called Cydney and a frail old woman. It was perhaps a little preachy of the programme makers to put these three examples alongside each other. At the same time though, because of the honesty of the people involved, it proved very powerful.”
Matt Baylis, Daily Express