“If you enjoy Prisoner: Cell Block H, all this melodrama might appeal.” 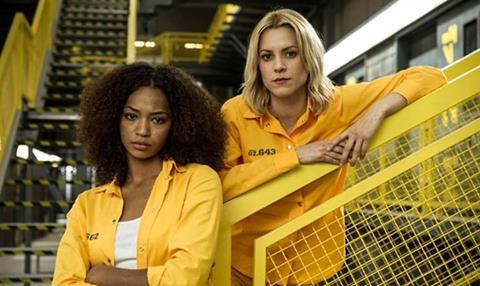 “Locked Up looks exactly like one of those programmes you chance upon while flicking in your hotel room searching for BBC World. Despite its production values, it is nearer Prisoner: Cell Block H than Orange is the New Black. The latter is dark and funny and nuanced. Locked Up is flip and silly and sensationalist.”
Andrew Billen, The Times

“Fans of Orange will baulk, but if you enjoy Prisoner: Cell Block H, all this melodrama might appeal.”
Christopher Stevens, Daily Mail

“Locked Up looks great, with most scenes drained of every colour except that acid yellow – the uniforms almost glow. And it is both gripping and gritty, although by far the most menacing thing about it is that it’s in Spanish. The swearing sounds much worse than the words that appear in the subtitles.”
Tim Dowling, The Guardian

“If you sat some people in a pub and asked them to jot down all the clichés of women’s prison dramas, they’d probably come up with the script of Locked Up.”
Matt Baylis, Daily Express

“In colour, the revealed footage of fauna from Sierra Leone and Guyana had a magical, Wonderful World of Disney quality. This lovely programme, however, was even more special for showing us the birth of Attenborough as a presenter.”
Andrew Billen, The Times

“It was like watching the home movies of a Fifties family who, instead of caravan holidays in Ilfracombe, spent their summers with rainforest tribes, learning to use poison blowpipes and trap giant lizards. That world no longer exists. Attenborough brought us the last glimpse of it. And by one of the happy accidents that have blessed his astonishing career, he did it in brilliant colour.”
Christopher Stevens, Daily Mail

“The restored colour footage from these early adventures was exquisite, superior to many of today’s TV images. It was like stepping into the boyhood of broadcasting itself, a time when three, untried, relative nobodies could go off and film their adventures, learning on the job and changing roles as it suited.”
Matt Baylis, Daily Express

“The sheer quality of the footage is hard to believe: birds with bright plumage, richly patterned snakes, Balinese musicians in seated rows. Today, Attenborough is rightly embarrassed by this wholesale animal shopping, but not only did the programme take me back to a time when you could bring a bear home from Borneo and keep it in your flat, it also made me long for it a little.”
Tim Dowling, The Guardian

“Marcella was a bold and interesting choice for ITV… but the main problem was that Marcella’s character remained undeveloped. The series squandered time on a vast array of (mostly unpleasant) characters and a virtual shoal of red herrings so that when the killer was finally revealed you might as well have flipped a coin.”
Rosy Barnes, The Telegraph