“It is television about grown-ups, for grown-ups.” Read on for the verdict on last night’s TV. 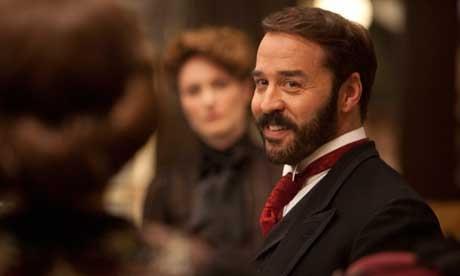 “Mr Selfridge must be the first costume drama series about the birth of a posh department store with a flamboyant entrepreneur at the helm and a pretty and ambitious sales assistant for … well, weeks. Since The Paradise on BBC1 in fact, which ended in November. It’s unfortunate, because this one, based on things that actually went on down the west end of Oxford Street towards the beginning of last century, is more fun so far. Jeremy Piven, white of tooth and and grand of gesture, certainly gives it his all – and then some – in the title role. Are we quite ready for more retail revolution on the telly though? I may be all shopped out.”
Sam Wollaston, The Guardian

“If you saw The Paradise, the BBC’s pre-emptive strike on the retail melodrama market, you’ll know precisely what to expect. And if you don’t care a lot about shopping, you’re not really likely to give a damn, since mercantile ambition seems to be pretty much the beginning and the end of Mr Selfridge’s psychology.”
Tom Sutcliffe, The Independent

“By the time the store doors opened I’d long since stopped caring whether Mr Harry Gordon Selfridge succeeded or not. It’s all two-dimensional. Too many of the characters, from the plucky young waiter Victor (Trystan Gravelle) to the salt-of-the-earth serving girl Agnes (Aisling Loftus), feel as if they were sketched out on the back of a sales receipt.”
Matt Baylis, Daily Express

“Mr Selfridge looks set to sink in the same stately fashion as ITV’s Titanic did last year, with all hands on deck. What is there to keep our interest? Jeremy Piven, as Harry Selfridge, the lord of all commerce, is nowhere near as watchable as Hugh Bonneville’s lord of all Grantham. Selfridge is merely a showman, who lacks even the variation of the tears of a clown. Yet he is still the most watchable character in the show… Mr Selfridge put its expensive goods on display last night. On inspection, not a line or a scene would I pay good money for.”
Andrew Billen, The Times

“The war in Afghanistan, the deaths of young soldiers, statsminister Birgitte Nyborg’s dilemma about whether to reinforce or pull out, statsminister (sorry, love saying that) Birgitte Nyborg in combat fatigues … this all has obvious appeal and relevance. But then suddenly it’s all about who’s going to be Denmark’s new EU commissioner. How can that possibly be of any interest, when no one knows or cares who our own one is in real life? And yet it is totally absorbing. Which is the brilliance of Borgen. It’s not just about the intricacies of coalition politics, though that does obviously ring a bell or two here as well. It’s about the human stories behind them.”
Sam Wollaston, The Guardian

“The first episode was slightly preachy about Denmark’s soldiers in Afghanistan, but the second, centring on the wildly uninterestring-sounding dilemma of whom PM Birgitte should appoint her European commissioner, was a superb tale of political intrigue… It is television about grown-ups, for grown-ups. We should try doing something like it in Britain one day.”
Andrew Billen, The Times

“Tankies: Tank Heroes of World War Two offered a true historical pivot and instances of real courage, telling the stories of six members of the 5th Royal Tank Regiment as they fought through the Second World War… The documentary properly alerted you to the horror that actually lay behind that softening euphemism.”
Tom Sutcliffe, The Independent

“A lovely film about a bunch of men, many of them hairy, and all better at doing clever things with metal than talking or being attentive to their long-suffering lady friends.”
Sam Wollaston, The Guardian