TV Critics: My Mother and Other Strangers; Deep Water; The Next Great Magician

“This is wistful, romantic, Sunday-night costume drama that doesn’t quite fill the void left by Poldark.” 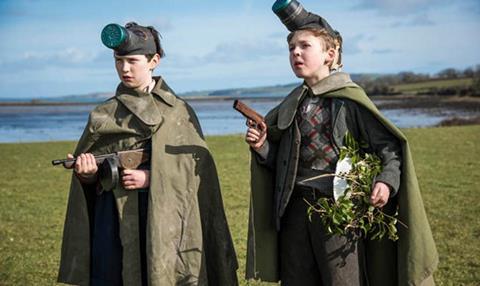 My Mother and Other Strangers, BBC1

“My Mother and Other Strangers isn’t very surprising, or original. The location might be refreshing but the story of US military chaps upsetting a local community is a well-told one. This is wistful, romantic, Sunday-night costume drama that doesn’t quite fill the void left by Poldark.”
Sam Wollaston, The Guardian

“We were taken along a path so well-trodden it is coated with shoe leather. When, in the opening moments, a group of Americans walked in on the local ceilidh and the fun juddered to a silent halt, we knew where this was heading.”
Jim White, The Telegraph

“None of it was quite believable. The situation was historically accurate. But the story was as computer-generated as the aircraft.”
Christopher Stevens, Daily Mail

“The characters, ‘Sensitive Captain’, ‘Unshaven Thug’, ‘Restless Teen’ are so two-dimensional they seem less like something out of Central Casting and more like the painted scenery.”
Matt Baylis, Daily Express

“If this thing proves watchable, it will be because of Hattie Morahan. Her distant English Rose intrigues; a really odd person trapped in a peaty cliché.”
Andrew Billen, The Times

“Deep Water’s base in historical crimes gives it extra poignancy. Plus, it explores interesting aspects of Australia and Australianness – not just the usual white, sexist, homophobic, lager-swilling stereotype, but a more complex, diverse, real place.”
Sam Wollaston, The Guardian

“The paradise beach provides a good backdrop for the darker undercurrents in Australian society. It’s the classic ‘cop with a bee in their bonnet’ set-up, lent extra credibility by the sexism of her bosses and the unspoken sense, all over the place, that the victims got what they deserved.”
Matt Baylis, Daily Express

The Next Great Magician, ITV

“Katherine Mills was easily the best of the acts… But the act crowned winners was a couple of Scottish stand-up comedians whose ‘magic’ consisted of vomiting up liquids. Why they were chosen was not explained. That left the whole show feeling like a trick had been played on viewers.”
Christopher Stevens, Daily Mail