“Anyone who genuinely thinks the BBC has a left-wing bias after watching Our Girl belongs in an underground bunker.” Read on for the verdict on last night’s TV. 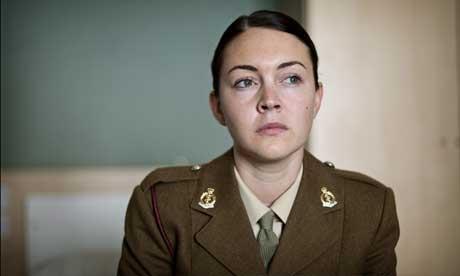 “It’s cliched and schmaltzy. I don’t believe it… It’s naive, crude – setting the war in Afghanistan against multicultural London, a racist dad against a Muslim boyfriend. It’s also practically a recruitment video for the army. And yet, in spite of all the above, and in spite of myself, I found myself being swept along, falling for it. Well, falling for Lacey Turner really; she gives a gutsy, very watchable performance, and I enjoyed it.”
Sam Wollaston, The Guardian

“Tony Grounds’ drama Our Girl was so unequivocally approving of the benefits of joining up that it seemed entirely possible that viewers at a loose end might consider giving Army life a go. There were characters here who derided the organisation. But they were such conspicuous dead-end losers that their criticisms simply turned into another kind of endorsement. As recruitment films go, it was much better written and acted than the usual output, though.”
Tom Sutcliffe, The Independent

“The depiction of the army – which became too obviously her surrogate family – would be better suited to a glossy advertising campaign than a television drama, glamorising both its methods and its personnel. For all that, however, Our Girl was a compelling 90 minutes.”
Sarah Crompton, The Telegraph

“Everyone involved must have known that yesterday’s one-off drama Our Girl ripped off an Officer And A Gentleman… But I don’t care. I’m a fan of An Officer And A Gentleman and I was won over by Our Girl. Like it’s template, it located itself in a grimy working class community yet soared to moments of lyricism with monologues that looked as risky as Richard Gere carrying off Debra Winger in his arms, but worked because Turner knew how to deliver them.”
Andrew Billen, The Times

“Anyone who genuinely thinks the BBC has a left-wing bias after watching Our Girl belongs in an underground bunker, surrounded by weapons and tins of baked beans. This was a recruitment film, very much in the mould of the unsubtle, drum-beating tosh shown in cinemas during the war… Apart from Turner, who was brilliant in the role, I couldn’t think of a single admirable thing about this drama.”
Matt Baylis, Daily Express

“It’s a lot of fun, gripping without taking itself too seriously – the cold war with a twinkle. And the Big Upheaval – of place, time, enemy, employer – isn’t just pulled off, it actually breathes new life into Foyle’s War.”
Sam Wollaston, The Guardian

“What makes the return of Foyle’s War such a joy, is not the narrative, but the mood – the pith of the writing, the depth of the detail of the brewing Cold War, and above all the richness of the performances… The whole thing is like having a conversation over a civilised dinner with a clever friend. His absence left a hole in the Sunday night schedules: it is lovely to have him back.”
Sarah Crompton, The Telegraph

“Having last seen Detective Chief Superintendent Christopher Foyle (Michael Kitchen) sailing off to America, supposedly for ever, there needed to be quite a lot of what is known in the script trade as Job Club, that is, lifeless scenes in which various characters are found and hired so the old gang can get back together again for the rest of the series. Fortunately, two hours provided ample time for that, alongside a toothsome mystery involving atomic secrets and ethically challenged scientists.”
Matt Baylis, Daily Express

“As so often, the greatest fun was discovering what Michael Kitchen might do with Foyle’s next line. Refusing to disappoint, he found the iambic pentameter in ‘Blessing being the only person implicated in the so-called eternity ring.’ What a trooper!”
Andrew Billen, The Times

“It was an extraordinary story skilfully told by Warwick Davis and director Ursula MacFarlane, who used Snow White and the Seven Dwarfs to cast it as a terrible kind of fairy-tale, drawing on a Nazi remake of the story and the fact that the Walt Disney version was one of Hitler’s favourite films. He just couldn’t see that he was the Evil Queen.”
Tom Sutcliffe, The Independent