“I had a tear in my eye as I said goodbye to one of the funniest and most truthful of family sagas.” 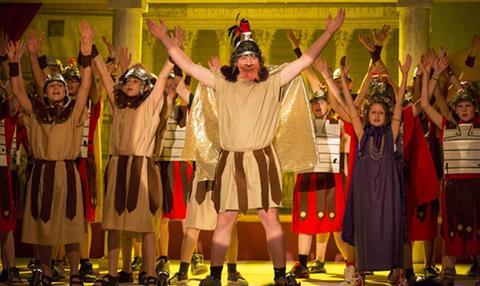 “Outnumbered reached the end of its final series in something like its old, sharp-witted form. As it drew to a close, with Spartacus an eccentric and unlikely triumph, I had a tear in my eye as I said goodbye to one of the funniest and most truthful of family sagas.”
Sarah Crompton, The Telegraph

“In the beginning, most of the art and all of the craft went into assembling the children’s semi-improvised performances into workable narrative wholes. But now the kids have minds, scripts and marks of their own. It’s a relief, but the laughs are fewer and our time together is over. It was great while it lasted though.”
Lucy Mangan, The Guardian

“Outnumbered charmed its way into the hearts of audiences in 2007 with an endearing mix of childish ad-lib and sitcom ham. Guy Jenkin and Andy Hamilton have known their way around a good line since Not the Nine O’Clock News, so the Brockmans were always worth popping in on.”
Will Dean, The Independent

“Outnumbered has ever been a comic ditty to paediatrician Donald Winnicott’s theory of the good-enough parent. The final episode suggested that Sue and Pete Brockman had turned out to be a bit better than that. It was a satisfactory ending to a series fatally weakened by its stars growth hormones.”
Andrew Billen, The Times

Dancing in the Blitz: How World War 2 Made British Ballet, BBC4

“David Bintley and director Paul Wu skilfully blended vivid anecdote with a narrative that suggested that the choreography forged in the furnace of wartime defined British ballet. Reconstructions and rare archive footage beautifully proved the point.”
Sarah Crompton, The Telegraph

“It was a charming and occasionally thrilling story. Even if the rarefied atmosphere surrounding the whole thing prevented it from becoming quite as moving or uplifting as we have come to expect from our tales of good arising from evil times.”
Lucy Mangan, The Guardian

“There’s so much going on beneath the words and in the editing, so many hidden agendas and conflicts of interest and loyalty, built up layer by layer and slowly coming to fruition, that the storyline grips with a rare ferocity.”
Gerard O’Donovan, The Telegraph

“Hie thee along to iPlayer and catch the beginning so that you can enjoy one of the most sinuously satisfying dramas around with performances from the whole cast and especially Keeley Hawes as the possibly-framed DI Lindsay Denton that should see them entirely buried under plaudits come awards season.”
Lucy Mangan, The Guardian

“I have a weakness for First Dates. I fear, nevertheless, its producers are making it less easy to relate to by relying ever more heavily on hard cases. Would Amie, a One Direction fan who was last in a museum aged 5, ever have found romance with a history student on his second MA, in museum studies?”
Andrew Billen, The Times

“The fun of First Dates is guessing which couples will hit it off. Couple of the night were Jackie and Colin, both in their 60s. They met, both barely daring to get their hopes up. By the end of the night, they were planning a cruise holiday on the Nile.”
Christopher Stevens, Daily Mail