“It rattled along at a thrilling pace with blade-sharp dialogue.” Read on for the verdict on last night’s TV. 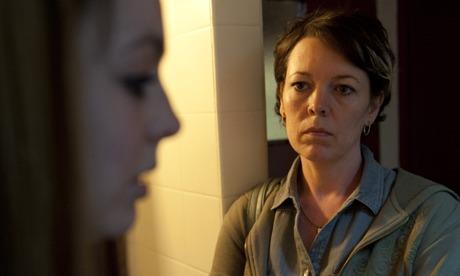 “Whether there’s much to be done with Run but endure it, I’m not sure. It belongs to a particular branch of British miserablism that seems to hold that the light just won’t penetrate below a certain level of society. But if you value that kind of thing, and buy into its implicit link between grimness and artistic seriousness, it is very well done indeed, and Colman’s performance justifies a viewing in itself.”
Tom Sutcliffe, The Independent

“It was extremely watchable in a self-punishing kind of way. Partly because the predictable has its own tragic fascination, but mainly because Colman was entirely convincing as Carol.”
John Crace, The Guardian

“Run was hardly sugar-coated, but such was the humanity of the writing and especially the performances that the characters felt compellingly real… It rattled along at a thrilling pace with blade-sharp dialogue.”
Sameer Rahim, The Telegraph

“Just as Top Boy painted an urban landscape with the bright colours of a Mondrian painting, here in Run it was the pace that was notable; the speedy rattle through everything that made life crap… The only positive moral you can really take from this is: whatever situation you’re in, there’s always someone worse off than you.”
Alex Hardy, Channel 4

“What made this such great storytelling was its lack of heroes: Carol came closest but we couldn’t forget she was a thief and a failure as a mother. There was time, as well, for the kind of clever detail your average urban crime show ignores.”
Matt Baylis, Daily Express

“This documentary belonged firmly in the gently whimsical category. And was all the better for it… The Skegness manager, Paul Chapman, is a TV legend in the making with his cheery perma-smile and repetition of the phrase ‘creating amazing memories’ at least once every sentence.”
John Crace, The Guardian

“If you’re well off then watching poorer people scrape by for your entertainment is painful; and if you do need to count every penny then wouldn’t you want your license fee (£145.50 per year) paying for something more lavishly entertaining?”
Sameer Rahim, The Telegraph

“The grimness of Broken by Battle had a purposeful design to it. It was intended to arouse our indignation at the Ministry of Defence’s current treatment of psychologically wounded soldiers and it did it very effectively.”
Tom Sutcliffe, The Independent

“More serving soldiers and veterans killed themselves last year than were killed in combat. The Ministry of Defence issued a statement maintaining it took the mental health of soldiers extremely seriously, while at the same time appearing to deny any responsibility and stalling the victim’s families with cripplingly slow and expensive battles. As one veteran pointed out, it looked more like a cheap insurance company.”
John Crace, The Guardian

“Boy, did the ’taches-and-tracksuits tale like to milk the rises and falls. The musical swells and earnest dialogue felt more fitting to, say, Cry Freedom, than a battle involving getting sporting stars into better pay deals and bright clothing.”
Alex Hardy, The Times

“One of the things that makes Stein such a good travel broadcaster is his willingness to be seen on camera as nothing more than a well-intentioned, occasionally wrong-footed tourist.”
Matt Baylis, Daily Express