“It was essentially TV designed for a Twitter LOL-along” 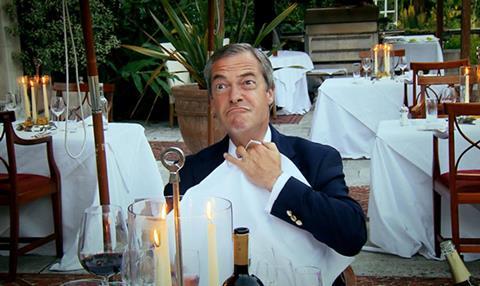 “I’ve seen more content – and less slapstick – in episodes of Chucklevision. Perhaps it’s right to make about Farage a programme as slight as his chances of becoming Prime Minister. Perhaps it’s also wrong to forget how important he is nonetheless, and super-inflate him into even more of a cartoon, in what was essentially TV designed for a Twitter LOL-along.”
Alex Hardy, The Times

“We didn’t learn much about politics or policies, but we did learn more about Steph and Dom’s lovely marriage. Dom’s affectionate nickname for Steph is “Sybil” (as in Fawlty Towers) since, as he told Farage, ‘My wife is at her best when she’s sort of grumpy.’ It was a love story, really, with Farage cast as the grinning gooseberry.”
Ellen E Jones, The Independent

“It works – they work –better on Gogglebox though, in snippets, interspersed among others. They don’t fill half an hour of television as well as they fill their glasses. Watching people get drunk is a bit boring, unless you are doing so too. I imagine an evening at the Salutation with Steph and Dom would be a lot of fun, but that doesn’t make it great television.”
Sam Wollaston, The Guardian

“Just as the UKIP leader is said to make up many of his policies in the pub, so this programme felt as if it was conjured up on the back of a fag packet. The idea that Steph and Dom would make better inquisitors than the usual political attack dogs is as flimsy as the champagne glass Farage dropped down himself.”
Bernadette McNulty, The Telegraph

“Most delightful, though, were the bursts in which we saw idiosyncratic Martin Amis describing the sport that he translated into a storyline in London Fields; shortly to be translated into a film starring Johnny Depp”
Alex Hardy, The Times

“Precious little was said, though, about why a quiet pub game, played by tubby blokes in viscoes shirts, attracted so much glory. Or why working men might have had this last hurrah as British industry wound down. That’s what I expected from a BBC4 show about darts. If I’d just wanted darts, I’d have gone down the pub.”
Matt Baylis, The Daily Express