“The impro acting is sometimes no better than a drama school exercise.” 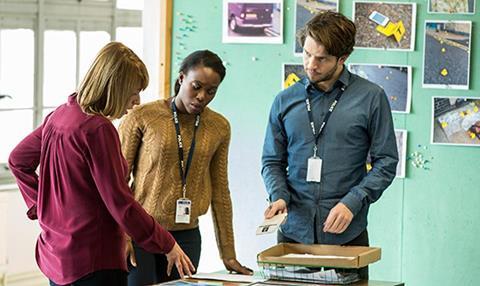 “Police procedural dramas are the house sparrows of the TV schedule: you can’t blame one of them for strapping on a jazzy tailfeather and trying to stand out from the others. Suspects, now in its fourth series, features unscripted scenes, in which the cast improvise dialogue within a prepared story outline. I think the aim is a documentary feel, but what actually makes it to the screen has far more in common with constructed reality shows such as Made in Chelsea. Nothing can be truly natural when everyone on screen is visibly searching for their next line. At points, I can almost see each actor’s brain twitching furiously as it churns out the next: ‘I’m starting to really worry about Pete.’ It doesn’t allow for the suspension of disbelief and the effect is quite alienating.”
Julia Raeside, The Guardian

“When it comes to detective dramas it can be incredibly hard to stand out from the crowd. But Channel 5’s Suspects has found a novel way of doing just that. Shot in the style of a fly on-the-wall documentary, it is unscripted, with the cast devising their own dialogue based on a detailed plot description. Without the distractions of detectives’ personal lives that have become so common in most police shows, this was utterly compelling and completely self-contained, meaning that the casual viewer didn’t have to contend with complex back stories and unravelling subplots. Other detective dramas should take note.”
Amy Burns, The Independent

“Suspects, Channel 5’s police procedural starring Fay Ripley, has returned for the fourth of its very short, very cheap runs. Suspects is customarily praised for its semi-improved dialogue and direction. In fact these can as easily distract as engage. A conversation in a hospital corridor yesterday was filmed so that we saw about 50 per cent of one of the two speakers. The impro acting is sometimes no better than a drama school exercise. You need to be as good as James Harkness, last night’s belligerent yet sly Scotsman Eddie to pull it off.”
Andrew Billen, The Times

“Suspects, the only drama series currently commissioned by Channel 5, is one of our more involving home-grown cop shows. It punches above its low budget and outperforms more heavily resourced shows such as BBC One’s new, disappointingly soft-centred Cuffs. However, the first episode of this third series showed that the formula is wearing a bit thin. The standard opening scene (a template that, as in this instalment, almost always sees two detectives approach a crime scene while a background radio news report fills viewers in on details), though efficient in dramatic terms, has become so overused it verges on self-parody. Also, even in these days of citizen journalism, it is rare for the media to report on incidents before the police get to them.”
Gerard O’Donovan, The Telegraph

“Much has been written about the return of Peep Show for its ninth and final series. But if you’re looking for a script with not a single word out of place, this week’s episode is hard to beat. This valedictory series could so easily have relied on the considerable audience love that still exists for Channel 4’s longest running sitcom, knocking out a few greatest hits before taking the applause. But the scripts keep getting better. Mark’s hellish egg-and-lettuce dinner party gets to the truth of what it is to be a selfish, flawed human, far better than any po-faced improvisation ever could. Don’t underestimate the need for a good writer.”
Julia Raeside, The Guardian

The task on The Apprentice was to throw a child’s birthday party for £2,000. As someone who sources his own kid’s party bags from Poundland, I may be biased: but how could anyone fail to organise this particular brewery piss-up? Let me count the ways. Forgetting to take a client’s contact details. Unnecessarily alarming a mother with a severe nut allergy about the contents of your birthday cake might be another. Turning an adventure playground outing into a health and safety lesson; failing to get your “theme” burgers out before the children hit puberty… these would also be options. As ever, it is hard to know how much is real on The Apprentice. Do the teams really get themselves showered, shirt-ironed and made up in the 20 minutes between Sugar’s alarm call and pick-up? Less easily faked is the dialogue. Sugar last night defined corporate man as one who walks around all day with ‘a dustbin lid on his arse not making decisions.’”
Andrew Billen, The Times

“The Supervet, now in its fourth series, has helped to establish Professor Fitzpatrick as a pioneering animal surgeon. Watching him at work was fascinating – the intricate operations were executed on pets so tiny that it was as if he was performing miracles. Surgeons are notorious for their cold bedside manner but this guy hands out hugs like free newspapers. The practice is a genuine one and the staff obviously love animals. They work hard – surgeries ran deep into the night – and, as in real life, there isn’t always a happy ending.”
Amy Burns, The Independent