“All the things that made The Muppet Show so great have been half-heartedly copied in a cheapskate fashion and paraded like a bad tribute act.” Read on for the verdict on last night’s TV. 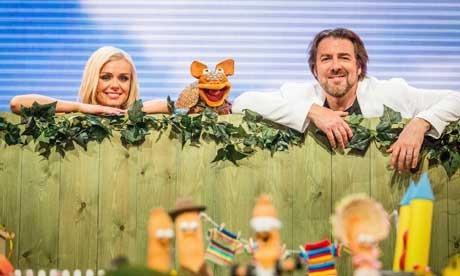 “It’s typical of ITV’s lack of oomph right now that it should have allowed That Puppet Game Show to pitch up on BBC1 on Saturday, where it proved a complete delight… From the first line I knew we and those spongy yellow faces were in good hands, and I was right. Children will love That Puppet Game Show, but not as much as adults.”
Andrew Billen, The Times

“It does all feel very 1987, but it’s warm, funny at times, and the guests (so far) are game. It should become more interesting once you get to know the puppets’ personalities a bit better. So far my favourite is an alcoholic armadillo called Ian.”
Sam Wollaston, The Guardian

“All the things that made The Muppet Show so great have been half-heartedly copied in a cheapskate fashion and paraded like a bad tribute act.”
Ben Lawrence, The Telegraph

“Fans of the anodyne quiz show might have liked it (who are these people?). Those who regard the telly as comforting background noise might also have felt no reason to turn it  off… On the whole, its quality was higher than the average TV car crash, though Henson enthusiasts might have been left discombobulated.”
Arifa Akbar, The Independent

“Hilary Devey was replaced last night in the new season opener by interior designer Kelly Hoppen, who soon brought a terror all of her own to the programme… Then something wonderful happened. Find it on iPlayer. It was TV’s most emotional ten minutes of the week.”
Andrew Billen, The Times

“The real new star of the show is a lift – a proper, old-fashioned, clanky, slow one, complete with overhead cameras to capture the uncomfortable ascent of the prospective entrepreneurs. The staircase in the old place was good – it meant they arrived huffing and puffing as well as terrified. But what the lift lacks in robbing them of their breath (and dignity), it makes up for in the adding of theatre. Dragons’ Den is still fabulous TV.”
Sam Wollaston, The Guardian

“The theatrical sense of jeopardy that pervades the show was wearisome and poor old presenter Evan Davis was given some shocking lines: ‘From burgers to burritos and salads to sushi, fast food is big business.’ After being forced to spout such drivel, the bear pit of the Today programme must seem rather inviting.”
Ben Lawrence, The Telegraph

“For those types who collect miniature steam-train sets, this slice of Britain’s industrial past might have been riveting; in all fairness, grainy archive footage of miners and the London Underground was fascinating to see. But hearing the bikers ooh and aah at driving a train, oiling an ancient wheel or lagging a 60-year-old boiler sent some of us to sleep.”
Arifa Akbar, The Independent

“So busy were Dave and Si in trying to justify their presence in a history programme that they forgot to tell us much of any historical importance. They just traversed the land, meeting up with dour types who spend their weekends oiling old engines rather than helping their wives… I longed for the restoration road trip to end and for our hosts to get back in the kitchen without further delay.”
Matt Baylis, Daily Express

“It’s not a crime drama. More of a mood piece dressed in genre clothing, a dark fairytale about gender and sexual violence and deep psychological scars, with characters that are emblematic, who behave not like real people but according to the whims of a film-maker more intent on art than realism.”
Gerard O’Donovan, The Telegraph

“The grown-up thing about this show is that it doesn’t shove rights and wrongs at us but draws us into the legal process and shows what outcomes that might provide. No heroes, no villains, just simple verdicts.”
Matt Baylis, Daily Express