TV Critics: The 7.39; The Bletchley Circle; Secrets of the Living Dolls

“It’s like watching a love story unfold with the stink of someone else’s sandwich up your nose.” Read on for the verdict on last night’s TV. 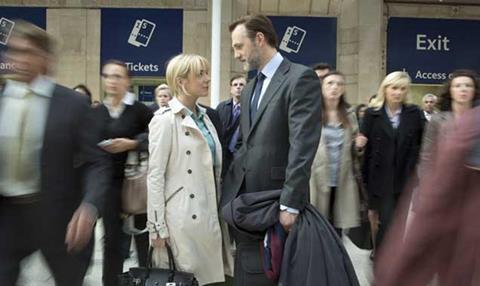 “David Nicholls’s dialogue was never forced, never off the mark. And his ensemble cast members played their roles with an ease and timing that comes only from acting excellence. As a determinedly modern update of Brief Encounter, it had some worth, but Carla Lane did it all in the sitcom Butterflies 30 years ago, with more laughs.”
Adrian Michaels, The Telegraph

“The trajectory of his characters’ relationship was predictable…  What writer David Nicholls excels at, however, is dialogue that captures the mundanity of the daily slog without overlooking any of its occasional moments of sparkle.”
Ellen E Jones, The Independent

“The power is in the brilliantly naturalistic cast, who slide into each discomfort as easily as warm butter slides onto warm crumpets.”
Alex Hardy, The Times

“This was supposed to be a modern remake of Brief Encounter… But the original was compelling and heart-breaking because the heroine, Celia Johnson, was trapped by conventions. Carl was just a selfish man who lacked the courage to sort out his life.”
Christopher Stevens, Daily Mail

“It is, as you might expect, exquisitely acted and written. What ruined it for me, though, was the sheer ordinariness of the whole thing. It’s like watching a love story unfold with the stink of someone else’s sandwich up your nose.”
Matt Baylis, Daily Express

“At times it threatens to get a bit too Enid Blyton as they wander round in a pack solving crimes and making sure they all have roughly the same number of lines each, but it never lapses into twee and hits a sweet enough spot for a wet Monday in January.”
Sam Wollaston, The Guardian

“The spy storyline was not so much John le Carre, as Angela Brazil, the authoress of countless adventures set in pre-war boarding schools for girls. The heroines rushed around like swotty prefects, less intent on solving crimes than on restoring law and order.”
Christopher Stevens, Daily Mail

“The former Bletchley ladies were reunited for another mix of ingenuity, daring and logical gymnastics. I just wish every second season of a great TV show didn’t have to begin the same way. ‘Come on, just one more mystery, it’ll be fun!’”
Matt Baylis, Daily Express

Secrets of the Living Dolls, Channel 4

“I’m one of those judge-not-lest-ye-be, let-your-freak-flag-fly sort of degenerates, but I must admit to finding this documentary troubling. Not because of the masking itself – which seems a harmless, if pricey, way to get your kicks – but because of what it says about society’s obsession with physical perfection and sexual availability.”
Ellen E Jones, The Independent

“The natural stance of the filming gives an air of live-and-let-live compassion, yet you can almost hear the channel high-fiving itself with each off-the-wall moment, all there to score highly on the Twitter Lol-o-meter. This film will certainly have achieved on that front.”
Alex Hardy, The Times

“This was just a freak show behind its own mask of fake propriety. All it did was put the losers up so we could laugh at them or hide behind the sofa. I wanted it to end as quickly as possible.”
Adrian Michaels, The Telegraph