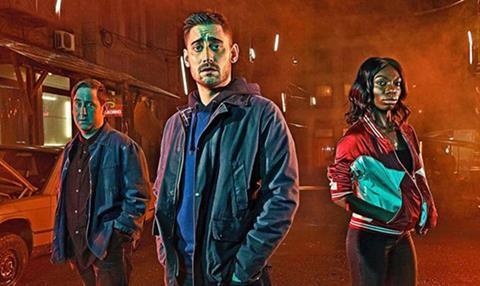 “The Aliens comes from the production team that brought us ASBO superhero series Misfits shared some of that show’s DNA: grungey dystopian setting, pumping soundtrack and whizzy direction. Such elements made it a tad yoof-drama-by-numbers, also reminiscent of 2009 film District 9. Still, its manic energy, swaggering pace and three strong leads made for a pulsating ride. Nanu nanu indeed.”
Michael Hogan, The Telegraph

“There are some standout funny moments (Jim Howick, as a gay mork with a crush on Lewis, is generally involved), although I sometimes wished it would take itself slightly more seriously. You could argue that as a metaphorical exploration of bigotry it is a little heavy-handed, but I don’t think The Aliens is going to sit still long enough for that sort of accusation to stick. It doesn’t have a sanctimonious bone in its body. Tremendous fun.”
Tim Dowling, The Guardian

“It’s the characterisation that held the episode back. Pathetic Lewis, the supposed hero, was so forlorn it was hard to feel sorry for him. And while Channel 4 may have led the way on on-screen diversity in recent years, it was hard to believe the “baddies” were black and the so-called goodies white. As the episode geared up to the final “aliens vs humans” scene, there was little to invest in.”
Daisy Wyatt, The Independent

“For me…the story dived too quickly down the mean streets. Rather like In the Flesh, for which [Fintan] Ryan wrote, The Aliens is addicted to grit, guns and grunge, as if that is all the show’s target demographic is up for. Most of the fun in the opener came from the relationship between Lewis and Dominic, a Mork who works as a menial ancillary worker with the border force.

“This usual bromance becomes truly comic as nice, gay Dominic (Jim Howick, Gerrard in Peep Show) is sexually infatuated with the generally friendless Lewis…If the focus tightens on Lewis, Dominic and Lilyhot, we may yet have something rather good here.”
Andrew Billen, The Times

“It is a testament to how sharp this second series has been that nothing of what will happen in the final instalment was remotely apparent at the finish of the penultimate one. And last night didn’t just set up the big finale to come – it ended in a manner that left my jaw hanging open. Proper shocking.”
Tim Dowling, The Guardian

“The second and final part of Adam Nicolson’s lament to declining bird numbers in the Outer Hebrides, was even more elegiac than the first. Nicolson, a besotted ornithologist, has a poet’s way with narration. He hails the “chocolatey elegance of the guillemot”. He also inspires poetry in his interviewees — a fisherman recalls cliffs white with puffin breasts and seas black with their wings. Or most of his interviewees — the Icelandic puffin hunter, armed with his net, is a little lost when Nicolson goes poetic on him.”
Andrew Billen, The Times