“This was like theatre in education meets theology meets telenovela.” 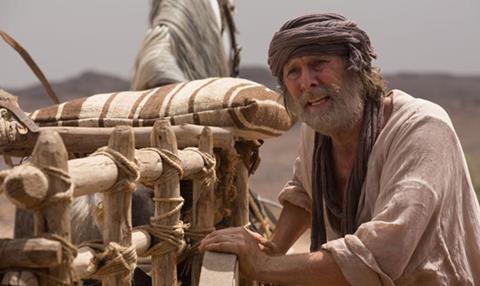 “Actually, in spite of the odd extra son, this is a fairly straight retelling of the Noah story. And yet Jordan does manage to chime with the modern world; it doesn’t take huge imagination to see payday lenders, food banks etc in that message from the angel.”
Sam Wollaston, The Guardian

“As a feature-length drama, this was like theatre in education meets theology meets telenovela. The stellar cast did their best with what they were given, and it was all sumptuously filmed. However, if God were watching me, by the time a giraffe appeared on the horizon he would have seen me snigger.”
Alex Hardy, The Times

“Apparently, the Beeb’s special-effects budget wouldn’t stretch to an epic aerial shot of the animals marching in two-by-two and the much-anticipated flood, when it finally came, took place almost entirely off-screen. Finding the human truth in biblical stories is important, but not at the expense of some heavenly spectacle.”
Ellen E Jones, The Independent

“This wasn’t so much a reinvention as a renovation: stripping back the story of Noah to its essentials: faith, love and loyalty. Overall, everything about The Ark punched well above its weight, from the spare desert beauty of the Moroccan setting, to the subtle North Africa-inspired soundtrack by Magnus Fiennes. More than anything it reminded us why the story of Noah has kept a hold on us for millennia.”
Gerard O’Donovan, The Telegraph

“David Threlfall has never done anything better. This Old Testament tale was religious storytelling of a modern kind — nothing epic, just an honest exploration of the meaning of faith and family.”
Christopher Stevens, Daily Mail

“The joke of the series is that [Richard] Ayoade is a stay-at-home who can’t see the point of exploring the world. A gag like this palls quickly, and Richard was soon boring himself. ‘I wouldn’t wish me on anyone,’ he admitted, as he traipsed round a football museum, a wine cellar and a fancy restaurant making sarky remarks. Poor Kathy [Burke] looked like she’d been lumbered with someone else’s teenage son; that takes family values too far.”
Christopher Stevens, Daily Mail

“I hate travel…Oh, but this I like. And that has nothing to do with Barcelona, and everything to do with Ayoade. Because Ayoade is very funny, properly disdainful and glib but somehow also charming. That’s some achievement, and the result is an unexpected delight, the best TV travel since The Trip.”
Sam Wollaston, The Guardian

“Ever in search of the next disappointment, the pair never dallied anywhere long enough to try our patience, and thus, true to his word, Travel Man packed it all in, in an offbeat, enjoyable half-hour.”
Ellen E Jones, The Independent

“It was all too relentlessly negative; if we want to hear people moan about how rubbish a holiday is, we have our own families for that.”
Alex Hardy, The Times