As with the famous chicken product, one bite sufficed for me. 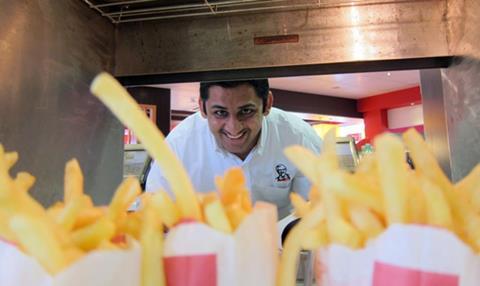 “In the end, the result is probably quite fair: neither side will be too upset. And it’s up to the viewer what to make of it all. Unexpected and brave openness from an ambitious, successful fast food company operating in a fiercely competitive world? Or an ugly picture of greed and ravenous consumerism fuelled by miserable wages for its workers and miserable lives for its chickens? I tend more towards the latter, obviously.”
Sam Wollaston, The Guardian

“In between were all these plots to pretend, in the vein of a docu-soap, that there was some drama going on. There was only one moment of surprise and that was when I heard “next time…” at the end. As with the famous chicken product, one bite sufficed for me.”
Matt Baylis, Daily Express

“This was not a documentary, it was a corporate video extolling the one-big-family ethos of the U.S. fast-food giant, with its worldwide turnover of £15.5 billion a year. Like a bucket of fried chicken that gets greasier the deeper you dig, this documentary became progressively more loathsome. This was what journalists used to call a ‘puff piece’, or unofficial advertising. These days, it’s just primetime viewing.”
Christopher Stevens, Daily Mail

“TV has produced some fascinating documentaries showing organisations at work, ranging from hotels to stately homes, that have succeeded because the film-makers gave us appealing characters and built a narrative around them. The Billion Dollar Chicken Shop did neither.”
Terry Ramsey, The Telegraph

“The story of Kentucky Fried Chicken is a remarkable one. Though I’m not sure that even the most devoted aficionados of Sanders’ secret spice mix think that the operation is worth three prime-time hours for what is –essentially- a good bit of public relations.”
Will Dean, The Independent

“Like its subject, The Billion Dollar Chicken Shop contained some golden nuggets but it was still pretty bland fare.”
Andrew Billen, The Times

“Restaurant critic Giles Coren was trying to boost the age at which he would live to by adopting some of America’s odder diets. I’m all for knowing where your meat comes from, but if that’s the price of living past the age of 80, then pass me the Bargain Bucket.”
Will Dean, The Independent

“When you saw their daily breakfast, you wondered why they were bothering to prolong it: a bowl of boiled barley came with onions and slices of lemon. At any rate, even if it found no firm answers, Giles’ quest for eternal life was dead funny.”
Matt Baylis, Daily Express

“Coren was ostensibly reacting to the death of his father. A more serious-minded programme might have tried to assess their diets and lifestyles and apportion blame. Instead we got a tour of American weird, and although British television loves these, this one was so good that it made Louis Theroux’s efforts look lazy. There has not been television like this since Gillian McKeith.”
Andrew Billen, The Times

“There’s not a lot of entertainment in it, until you watch with someone else. Then you’ll hardly be able to hear the telly, because you’ll be talking and criticising so much. Three In A Bed is guaranteed to turn the best of us into Gogglebox divas.”
Christopher Stevens, Daily Mail