“It was a joy to see the mismatched cop duo back together.” Read on for the verdict on last night’s TV. 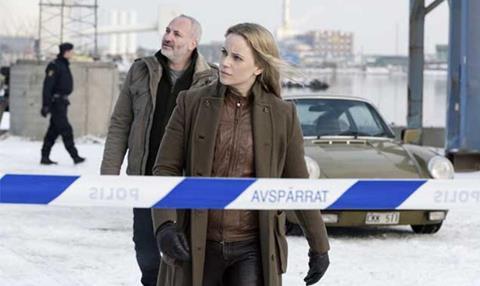 “This was stylishly shot and classily compelling. Mainly, though, it was a joy to see the mismatched cop duo back together. I’d happily watch them issuing traffic tickets or shuffling paperwork, let alone pursuing ingenious serial killers.”
Michael Hogan, The Telegraph

“It’s beautiful to look at, in a gloomy way, of course. It’s a brilliant case too. Plus there are twists and subplots about the lives of the gang members, and the people trying to catch them, their families and children. It’s murky, swirling, dark and dangerous.”
Sam Wollaston, The Guardian

“The plot is superior enough, as is the ambience, but what fascinates is the relationship between the Danish detective Martin and his Swedish partner in crime detection, Saga. Actors Kim Bodnia and Sofia Helin make it, in its own matt-flat, anti-dazzle way, as unmissable as Sherlock.”
Andrew Billen, The Times

“As much as I like this show I do sometimes wonder if the plots take second place to the relationships. The Bridge has the odd creaky spot, in other words.”
Matt Baylis, Daily Express

“Benedict Cumberbatch played the high-functioning sociopath super-sleuth with aplomb. While it is not the strongest story of the Sherlock saga, the writing is just as sharp and fresh. The Sign of Three was packed to the rafters with wit and comedy.”
Neela Debnath, The Independent

“It was a bravura performance by Cumberbatch… [But] there were a couple of weaknesses to this otherwise dazzling episode: it took until half way through for the somewhat meandering plot to crank into gear and, like Sherlock’s New Year’s Day comeback, it lacked a charismatic villain.”
Michael Hogan, The Telegraph

“The Sign of Three was exactly what the doctor, possibly Watson, might have ordered to warm us to the series and to its detective. Yes, the plot, again, made little sense, but this time Sherlock charmed rather than commanded us to suspend our disbelief.”
Andrew Billen, The Times

“Just as Sherlock seemed to have toppled over the brink of parody and been splattered on the pavement of self-indulgence, it sprang back to life – saved by its own brilliant characters. This was an hour-and-a-half of comedy drama worth watching again and again.”
Christopher Stevens, Daily Mail

“There is something of 10 years ago about it. The idea – foul-mouthed, mean, selfish, racist old dragon, moaning about the modern world and everything else – wasn’t the most original idea even then. But it is still fun – and funny – because of Tate’s fabulous, full-on performance. “
Sam Wollaston, The Guardian

“I’m not convinced Operation Grand Canyon With Dan Snow really merits two parts. Nice scenery, and the history’s quite interesting. But for the spectator, one lot of rapids is much like the next.”
Sam Wollaston, The Guardian

“Dan is an overgrown public school sixth-former, and this was an adventure camp for jolly good chaps, with bags of leadership tests and sing-songs round the fire. However much fun it was to make, it was exhaustingly hearty to watch.”
Christopher Stevens, Daily Mail