TV Critics: The Genius of Invention; The Good Wife; Way to Go; Carved with Love

“There’s frustratingly little meat on the bones, and few details that would even begin to challenge a first-year GCSE student.” Read on for the verdict on last night’s TV. 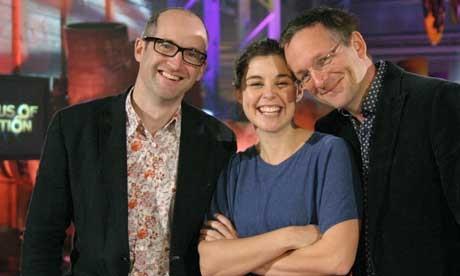 The Genius of Invention, BBC2

“The Genius of Invention is post-watershed, though it really needn’t be because in everything from presentational style to the level of the material it contains it’s essentially a children’s programme… After you’ve endured the tedious forthcoming attractions montage with which all such programmes are now obliged to begin, what you get is a pretty basic introduction to technological history, enlivened by the odd demonstration… There’s frustratingly little meat on the bones, and few details that would even begin to challenge a first-year GCSE student.”
Tom Sutcliffe, The Independent

“God, it was terrible. Presenters Michael Mosley, Professor Mark Miodownik and Dr Cassie Newland darted backwards and forwards through time, scientific concepts, experiments and explanations until all hope of uniting them – despite a repetitious element too – in one comprehensible, never mind moving and awe-inspiring, story was gone… I’ve been led by steady hand through more complex stuff than this and emerged not just awed but better informed, instead of more baffled than ever.”
Lucy Mangan, The Guardian

“You could see the BBC’s problem. How can you make a programme on innovation and not strive for innovation in terms of presentation? So the series producer, Michael Tuft, came up with an innovative format: a show that looked as if it was live and filmed before an audience but on neither account was… The three hosts were all the same: giggling enthusiasts, ‘nerdy but nice’, who found everything such fun… I know James May is approaching a well-deserved retirement, but could he not have been co-opted to provide some gravitas?”
Andrew Billen, The Times

“I have to admit to a soft spot for this kind of TV science. I’d far rather learn how a bus engine works than listen to a dozen people rattling on about quarks, neutrinos and black holes. It works only when done with a certain energy, though: if the presenters aren’t excited or able to give a good impression of being so, it’s as dull as your worst Monday afternoon physics lesson. This trio is sufficiently sparky for the job, without seeming as if they’re talking to children.”
Matt Baylis, Daily Express

“Slick but not shallow, chewy but digestible, sexy but smart. If you’re a latecomer to the series, boxset yourself up to date and settle down. It’s gonna be a bumpy ride.”
Lucy Mangan, The Guardian

“How can I flatter American trash such as The Good Wife with four stars? Easily, because Julianna Margulies’s legal soap always delivers a bit more than you expect.”
Andrew Billen, The Times

“It is quite intriguing – a black comedy in which three friends, all down on their luck, find a new career offering euthanasia without the airfare (not so much Dignitas as Indignitas)… Too much of the comedy is dependent on wild over-reaction but Blake Harrison, who played the thick one in The Inbetweeners, is good as Scott, who continually has to explain to his colleagues that normal business rules do not apply. “There is no word of mouth, you idiot,” he says, when they’re discussing routes to expansion. “If we do a good job our clients are dead.”
Tom Sutcliffe, The Independent

“Carved with Love has been as solid and carefully burnished a BBC work as you could hope for, finishing its three-part run last night with a swift, thorough and wholly understandable history of medieval woodcarving.”
Lucy Mangan, The Guardian