TV Critics: The Mill; Child Genius; People Just Do Nothing; The Seven Wonders Of The Commonwealth

“It grips with the power of a story shrieking to be told.” 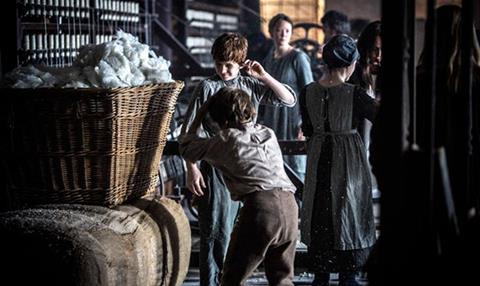 “The Mill is an impressive piece of work about a pivotal period. God, it’s a bleak one, though.”
Sam Wollaston, The Guardian

“Once you get past the impenetrable northern accents and the equally dense dark in which so much of it is shot, it grips with the power of a story shrieking to be told. An ebullience, almost a gaiety, accompanies this re-enactment, however, which prevents it being either truly a ‘misery drama’ or agitprop.”
Andrew Billen, The Times

“A ridiculous piece of Old Labour posturing that scrambled to squeeze as many socialist stereotypes into an hour as possible. This was Jane Austen for Lefties, made all the sillier by ham-fisted attempts to draw parallels with today’s economic situation.”
Christopher Stevens, Daily Mail

“Most of the characters in The Mill seem to function as mouthpieces for history text books albeit with a not so subtle contemporary relevance. John Doherty (Aidan McArdle), for instance, sounded like he’d been cribbing from the Occupy movement.”
Ellen E Jones, The Independent

“The tone meandered between a hellish, mud-splattered alternate-universe Coronation Street and a GCSE history lesson on British welfare reform. These characters were dirt-soaked cut-out shapes, each representing some grotesque failure of pre-Welfare State Britain.”
Charlotte Runcie, The Telegraph

“This documentary is not going to find the cleverest child in the country, but that’s not really the point. Like the first series, it’s just a compelling and sober warning about the dangers of introducing a timer to family holiday games of Scrabble.”
Charlotte Runcie, The Telegraph

“Child Genius was a bit depressing, to be honest, in that it underlined my many inadequacies as a parent.”
Sam Wollaston, The Guardian

People Just Do Nothing, BBC3

“It’s properly hilarious, and true – culture-capturing even. Maybe not so original in format, but brilliantly written and performed.”
Sam Wollaston, The Guardian

“A glorious first episode. BBC3 produces so many of these gems, I really cannot decide which is the stupider recent decision by the BBC: to ban it from the airwaves or fire Panorama’s entire reporting team while ploughing more money and recruits into the little watched Newsnight.”
Andrew Billen, The Times

The Seven Wonders Of The Commonwealth, BBC1

“It was by no means uninteresting but too rushed to go into any sort of detail and the general reluctance to mention why all these places were being visited gave it a jerky and vague air.”
Matt Baylis, Daily Express

“This lightweight travelogue was entertaining, informative and a stirring reminder that the Commonwealth, with its two billion inhabitants, is the biggest, friendliest alliance on Earth.”
Christopher Stevens, Daily Mail