“A better title for the programme would have been Taking the Piss.” Read on for the verdict on last night’s TV. 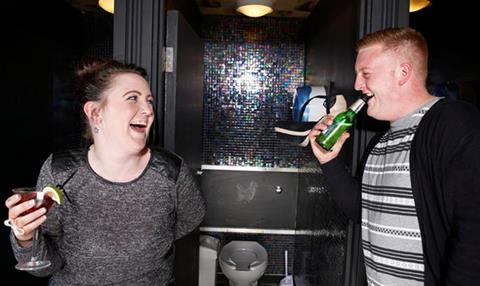 Up All Night: The Nightclub Toilet, Channel 4

“If you thought Sex Box – or to be more accurate, Sex in a Box – was one of the more pointless hours you will ever spend in front of a television, then Up All Night: The Nightclub Toilet will have made you realise just how wrong you were. A better title for the programme would have been Taking the Piss.”
John Crace, The Guardian

“In Up All Night, the footage of men urinating was accompanied by orchestral music and a nature documentary-style voiceover, but don’t let that fool you. There were no insights into the human condition to be had here, only depressing confirmations of known truths, the kind we drink to forget.”
Ellen E Jones, The Independent

“It was touching, truthful and made you laugh, but inevitably it had lots of footage of drunk people behaving like idiots and there’s a limit to the depth you can wring out of that… It wasn’t the fault of the film, but I came out thinking our culture of getting legless on a Friday night isn’t one much worth celebrating.”
Serena Davies, The Telegraph

“It’s hard to see how C4 can go downmarket from here. Possibly a hidden camera in the colon of a minor celebrity — otherwise, this must be TV at its tackiest. It was certainly Britain at its most disgusting.”
Christopher Stevens, Daily Mail

“We were denied true tragedy and the devastating emotional climax the trajectory of the story demanded by an ending that left all three main characters, Tommy, Grace and Inspector Campbell in limbo – nail-biting limbo, but limbo nonetheless. Still, it was such a ripping episode in every other way it still earns four stars.”
Serena Davies, The Telegraph

“Six episodes back I was not sure if the emotional engagement could match Peaky’s magic realist style. Sure enough, the final, mistaking itself for a Western, was as in love with itself as ever… Yet, and undeniably, we cared that Cillian Murphy’s Thomas survived the shootout, and we cared just as much for Sam Neill’s Campbell, Annabelle Wallis’s amazing Grace and even a bit for red Fred.”
Andrew Billen, The Times

“This half-hour archaeology series, presented by Michael Buerk and Bettany Hughes and featuring a range of guests, in this case James Purefoy, was fun.”
Christopher Stevens, Daily Mail

“While the variety of clobber that lies buried is part of its charm, it needs rather more time and organisation when presented on screen… With only scraps of information on offer, the treasure might just as well have remained buried.”
John Crace, The Guardian

“If the old Soviet Ministry of Information had set out to make a film entitled Women Were Mistreated In The Past, it would probably have come up with something more subtle than this drama, in which doctors, nurses and husbands constantly collude against female patients like the agents of a hostile state.”
Matt Baylis, Daily Express

“It’s a supremely silly set-up and the actor Sam Neill knows it. How else to explain the free rein of movement he’s given to his camp right eyebrow? As Chief Inspector Campbell in Peaky Blinders, Neill rarely lets the eyebrow escape its moorings, but as FBI Agent Emerson Howser in Alcatraz, it’s bouncing around like a caffeinated caterpillar.”
Ellen E Jones, The Independent

Talking to the Dead, Sky Living

“Gwyneth Hughes’s script made little of Fiona’s (Sophie Rundle) morbidity and far too much of a grubby plot that was no clearer to me at the big-ticket end than the beginning. This concluding Drama Matters had a great supporting cast too. Shame.”
Andrew Billen, The Times