“Just how long can you be chased by zombies for before it all starts to get a bit boring?” 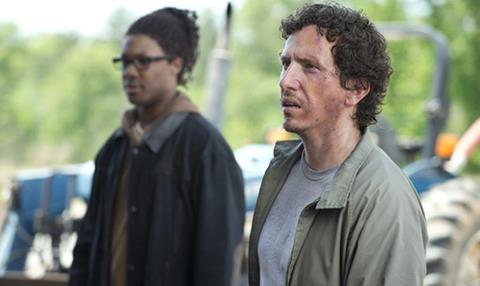 “Andrew Lincoln was, as always, excellent. He’s one of those actors who plays an American so convincingly that when I hear interviews with him in real life, I question why he’s putting on a fake British accent. But there was definitely something missing here – and I’m not just talking limbs. I’ve had reservations about The Walking Dead from day one. Not because it isn’t brilliant – it often is – but there’s always been a part of me asking “just how long can you be chased by zombies for before it all starts to get a bit boring?” And if last night’s season six premiere was anything to go by, I now have my answer – about five series.”
Amy Burns, The Independent

“Overall, the result is an inventive episode that makes good use of its accomplished cast and ultimately builds to a tantalising cliffhanger. If First Time Again is anything to go by, The Walking Deadhas just discovered a new lease of life.”
Alex Straker, The Independent

“Men are shallow. Whether you’re a “genetic woman”, as one of the subjects of Sex Diaries: Trans Lovers would have it, or a woman who begins life as a man, you’d better hope you’re blessed with a pretty face and/or the skills to enhance it with make-up. Because not one of the men interviewed in Charlie Russell’s accomplished documentary sees much beyond the surface. The focus is largely on the men but the women’s stories are often more interesting. Paige, a 43-year-old carpenter and joiner, talks about the perils of living openly as a woman. The street stares are frequent and, while the camera follows her (perhaps because it does) a group of schoolboys throw a verbal grenade at her back as she passes.”
Julia Raeside, The Guardian

“Mark suggested men who resist the allure of transgender women are most concerned about being stigmatized as gay. He did, however, allow that part of the attraction was the beautiful female face came with the paradox of male genitalia. Harlen…is now looking for another transgender partner. Was it love, or a bedtime preference he was looking for? Or was it something nearer to the misogyny of another interviewee, for whom even the best was barely good enough. He wanted a woman who knew what “men want” and get “confused” by their menstrual cycle.”
Andrew Billen, The Times

“It’s good when a film tries to argue something rather than just show lots of clips. In this case though, the argument was that rock ‘n’ roll rhymesters replaced the stuffy poetry of previous generations and turned the kids onto verse. This was a blatant fib  but it was still fun… But the rich variety of examples only disproved the point even further. Poetry is alive and ever changing. Which means it always was.”
Matt Baylis, Daily Express

“One lone wolf. In the entire 500 days, they never succeeded in filming the pack. The wildlife close-ups were incredible and the backdrop was breathtaking. The team who lived out there may disagree with me, but I think it was worth every one of those 500 days in the wild.”
Amy Burns, The Independent

The Celts: Blood, Iron and Sacrifice with Alice Roberts and Neil Oliver, BBC2