TV Critics: The Wonder of Dogs; Sound of Cinema; Peaky Blinders; The Guilty; The Big C

“Kate Humble couldn’t have been any more enthusiastic about dogs if she’d wagged her tail and licked their faces.” Read on for the verdict on last night’s TV. 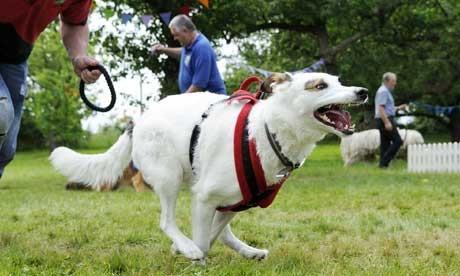 The Wonder of Dogs, BBC2

“If I was asked to schedule something utterly middle-of-the-road that would be guaranteed not to upset anyone, it would be a programme with lots of slow-motion shots of dogs looking unbearably cute with their ears blowing back in the wind, presented by Kate Humble… Along with co-presenters Steve Leonard and Ruth Goodman, I can take or leave Humble, but I couldn’t get enough of the dogs.”
Sam Wollaston, The Guardian

“Humble couldn’t have been any more enthusiastic about dogs if she’d wagged her tail and licked their faces. And the programme was much the same… By the end of the relentlessly upbeat hour, I got the slightly queasy feeling of having eaten too many doggy chocs. But – and it’s a big but – the BBC is really very good at weaving lots of facts into this kind of show.”
Neil Midgley, The Telegraph

“This programme was in reality a brief history of unnatural selection with dogs as the exhibits… The documentary ended up pretty pointlessly with Humble’s three mongrels being DNA tested, but I learnt plenty.”
Andrew Billen, The Times

“An interesting tale but not one that shows us in a great light.”
Matt Baylis, Daily Express

“Occasionally, a documentary comes around that manages not only to entertain and inform you, but also to change the way you look at its subject. BBC4’s magnificent Sound of Cinema: the Music That Made the Movies is one such series.”
Sarah Hughes, The Independent

“My general lack of musical sense has made me well-suited to watch Sound of Cinema, a documentary trilogy that, in a very real way, is taking me by the hand and explaining a world I’d barely noticed before… The result was, for this reviewer at least, a revelation.”
Matt Baylis, Daily Express

“Like the best period dramas, it has obviously had an awful lot of money spent on it – the on-screen look is so glossy, it could have been hand-polished with 10-pound notes… [But] in its unrelenting gloom, it fails to offer viewers a reason why they should give a monkey’s about its central character.”
Neil Midgley, The Telegraph

“There are some who feel that the period crime drama’s anachronistic use of the likes of Nick Cave and Jack White undermines its credibility – as though any show featuring a brave undercover colleen with a desire to avenge her dead Pa is aiming for credible – but I feel it adds another layer of swagger to an enjoyably exuberant series.”
Sarah Hughes, The Independent

“I was aware of a We Need To Talk About Kevin aspect to the narrative that I might have found sinister but for the distractions of soppy cinematography, over-emphatic incidental music and Darren Boyd, who made an excellent John Cleese a while ago but whose forte, I fear, may not be playing the father of a dead child.”
Andrew Billen, The Times

“As dramas about someone living with a terminal illness go, this one has been better than most. A bit of humour, some touching moments and a script that generally has stayed the right side of mawkishness, if not always of credibility. It’s just that – and I feel bad about saying this – there’s no place left for the show to go, now it’s in its fourth series… In short, we’ve had everything, and this first episode felt terribly familiar.”
Sam Wollaston, The Guardian