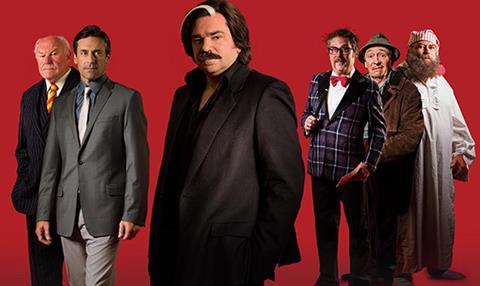 “You know your quirky little comedy has become A Pretty Big Deal when Lorraine Kelly agrees to appear in it. The Queen Elizabeth II of daytime TV (in that she’s long-serving, popular and has some simply delightful outfits) isn’t the only star cameo in the new series of Toast of London – Jon Hamm and Brian Blessed pop up later in the run, but she is the first, and perhaps the most unexpected. Sometimes when cult comedies become successful, they lose their charm. Let’s hope that big name cameos don’t detract from Toast of London’s weird appeal. So far, so funny.”
Isabel Mohan, The Telegraph

“It seems that – even with bonkers conspiracy theories and pickled-onion sex – the surreality and the bawdiness have been reined in, and no one wants to see that. Perhaps success might be partly to blame; Matt Berry’s own star has been heading in the opposite direction to his creation’s. Now look at these famous people wanting a piece of Toast. Lorraine here, Mad Men’s Jon Hamm later, Peter Davison, Brian Blessed … I wonder if this brighter spotlight and more attention has meant some cleaning up going on. See, success, celebrity, they don’t make anything better. I’m worried it sounds like I’m too down on Toast of London. It’s still one of my favourite things on TV. It’s still hilarious and brilliant. It’s just maybe not quite as hilarious and brilliant.”
Sam Wollaston, The Guardian

“Channel 4 last night established a new comedy power-hour between 10 and 11pm on Wednesdays. Toast of London, starring (and co-written) by Matt Berry, is a delight. It is a celebration of a certain type of Seventies thespian in a sitcom that, although as surrealist as Father Ted, obeys the rules of Seventies comedy.”
Andrew Billen, The Times

“Berry and co deserve to be celebrated as this is one of the very few genuinely funny comedy series on TV right now. Is it silly? Yes. Childish? Definitely. Crude? In a charming, and at times predictable, way. But above all, it’s funny. It actually makes people laugh out loud – which is more than can be said for a lot of recently made British “comedies” (yes, I’m talking to you, Drifters, and you, Crims).”
Amy Burns, The Independent

“[Toast of London] is certainly more hilarious and brilliant than Josh. Which doesn’t mean Josh Widdicombe’s eponymous sitcom – about a slightly younger version of himself sharing a flat with a couple of mates (played by Beattie Edmondson and Elis James) – is bad. There is a nice chemistry between the three of them, and between Edmondson and her mum (played by actual mum Jennifer Saunders). It’s all nice, in fact. Funny too, sometimes, in a nice, cosy, safe, familial, familiar kind of way. Exactly as you’d expect a flatshare sitcom to be.”
Sam Wollaston, The Guardian

“Sex dominated last night’s Peep Show, however. Watched by more or less everyone he knew on Mark’s flat-cam, Jeremy had sex with a man. His subsequent confusion was played out in a magnificently self-questioning speech at his pal Super Hans’s wedding. There was, admittedly, a small hint of this in season one – a surpressed memory of Super Hans fellating him when high. There is a danger here with sex, admittedly bad sex, becoming the focus of the second series of the brilliant Catastrophe, C4’s comedy roll may be heading too far down one particular track.”
Andrew Billen, The Times

Colour: the Spectrum of Science, BBC4

“Presented by Dr Helen Czerski, the programme explored everything from the structure of colours in nature to the incredible tricks our eyes and brains play on us to see them. Her exploration included a ride aboard a jumbo jet equipped with a 17-tonne infra-red telescope. But, most importantly, Dr Czerski revealed the true colour of that dress – you know, the one that nearly broke the internet earlier this year? Just to confirm, it was blue and black but in the right light, it did appear cream and gold. Best thank science for clearing that one up.”
Amy Burns, The Independent