“It’s crisp, well-formed, the right shape and colour, and ticks all the quality control boxes, but it feels like quite a long hour.” 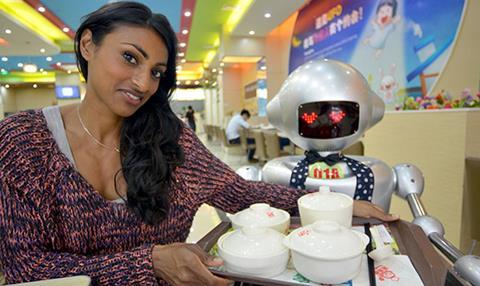 “It’s Tomorrow’s World, for food. People like science, and technology, people love food, so it’s a winner. And people like Dara Ó Briain. I like him too. He’s clever, and gets science, as well as being funny. Although he’s not being that funny here, there aren’t many jokes in Tomorrow’s Food. The programme covers a lot of the world, and ground and stories in the hour. It’s crisp, well-formed, the right shape and colour, and ticks all the quality control boxes, but it feels like quite a long hour. It lacks flavour and personality. And nobbles. I like my television to be a little more nobbly, and more memorable.”
Sam Wollaston, The Guardian

“At the beginning of Tomorrow’s Food, Dara Ó Briain claimed that his busy new series would “change the way we think about food for ever”. That was a bit over-blown. The comedian is an engaging presenter, but he is not a food science expert (he has a background in theoretical physics). Angela Hartnett may not be the most natural presenter but the Michelin-starred chef earned respect from the futuristic pizza kitchen staff (if she says something tastes all right, it must do, right?). You felt you could take her gadget recommendations seriously. With that in mind, if I take nothing else away from this, I might put a sonic decanter on my Christmas list.”
Sally Newall, The Independent

“Tomorrow’s Food was interesting enough: a popular-science programme, like Food & Drink, with facts instead of recipes. Ó Briain – a scientist before he was a comic – is always watchable. However, overall the show felt a little too soft. The tech expert Shini Somara travelled to Shanghai to discover that she preferred a multisensory meal worth £400 to some fast food made by robots. Of course she did.”
Alex Hardy, The Times

“The timing for Isis: The British Women Supporters Unveiled was tragically spot on. For a year, right up until last month, a brave undercover reporter, named only as Aisha, had been infiltrating female Islamic extremists. And then came the Paris atrocities, which involved at least one woman extremist, Hasna Aitboulahcen, killed in a police raid after the attacks.This grimly addictive programme was topped and tailed with footage of the Paris attacks. But the meat of it was concerned with Aisha’s determined efforts to befriend extremists in east London. But it came alive with the undercover footage of the study circles. And it turned into must-see telly when one extremist rumbled Aisha. She called her a spy and demanded Aisha hand over her bag, with its hidden camera.”
Harry Mount, The Telegraph

“If from a documentary you want access, relevance and impact, this brave film scored highly on the first two, but fell slightly short on the last. Isis: The British Women Supporters Unveiled drew a more or less direct line from those sorts of meeting to the devastating Paris attacks of 11 days ago. However, it was frustratingly short on answers. I would have liked to have known a little about what it would look like, to harness that force against extremism. However, perhaps that’s emblematic of the situation as a whole: the problems are far easier to identify than the solutions. This was a noble start.”
Alex Hardy, The Times

“London Spy became ever more ridiculous as it lurched into its third episode. The series may echo the real-life story of Gareth Williams, the MI6 man found dead in a locked bag in Pimlico in 2010. But I found myself behaving like Kingsley Amis when he watched TV drama, saying, ‘No, he wouldn’t say that. She wouldn’t do that. That wouldn’t happen.’ But it has all become wearily unconvincing, from the grating, atonal background music to the artful, washed out, underlit scenes of London. The central question – why is Danny being framed for the murder – is being stretched paper-thin over five one-hour episodes. Where the US espionage drama Homeland kept viewers in suspense, and suspended disbelief, London Spy does neither.”
Harry Mount, The Telegraph

“Part of BBC Three’s Breaking the Mould Season, this was framed around YouTube-famous, US-based teenage transgender couple Arin Andrews and Katie Hills. Though a documentary, the reality show-style element by Barcroft Media (a company that specialises in showing  the ‘amazing side of life’) occasionally veered into making it feel like an episode of Made In Chelsea, just with a lot, lot more at stake - and what a shame not to get any Brits on board. But I’m not sure what I thought about the programme-making really matters. If it can help anyone struggling to come to terms with who they are, then it’s worth watching.”
Sally Newall, The Independent

“Matthew Heineman’s film about the Autodefensas army of ordinary folk who took on the brutal drug cartels in the state of Michoacán in Mexico. Dr José Mireles, who leads them, is a dude – a charismatic leader, orator, lover and silver fox who could have stepped from the silver screen. But, as the Autodefensas grow in power and success, there are questions about whether they’re any better than the cartels they’re fighting. There’s a parallel story going on, north of the border in Arizona, where Tim “Nailer” Foley leads the Arizona Border Recon. The parallel is unnecessary. And questions remain unanswered, such as: what happened to the two captured leaders of the Knights Templar cartel? But it’s an incredibly brave piece of film-making – Matthew Heineman goes right in there with his camera where the bullets are flying and he takes us with him. The result is an extraordinarily brutal portrait of lawlessness.”
Sam Wollaston, The Guardian