TV Critics: Ultimate Swarms; Attack of the Zeppelins; Horizon; Under the Dome; Dreaming the Impossible

‘Bank holiday TV is flicking the Vs in revenge for us discovering Netflix and on-demand and boxsets.” Read on for the verdict on last night’s TV. 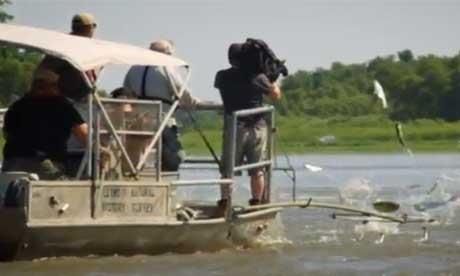 “There was phenomenal footage of Mexican free-tailed bats flying in biblical proportions, a blizzard of locusts and a fountain of silver carp jumping out of the water … The only fly in the ointment in this weird and wonderful hour was the dance music that sometimes accompanied the sight of these swarms.”
Arifa Akbar, The Independent

“This wasn’t a sedate, authoritative variation on a similar theme; instead, it felt like pop science filler… Bank holiday TV is flicking the Vs in revenge for us discovering Netflix and on-demand and boxsets.”
Rebecca Nicholson, The Guardian

Attack of the Zeppelins, Channel 4

“Attack of the Zeppelins came over the top, all guns blazing… The voice-over spared no hyperbole, but this exploration of a largely forgotten aspect of the war had genuine substance.”
Paul Kendall, The Telegraph

“For those who wanted it, there was a wealth of technical detail in here, from the gory ingredients used to build the inflatable shells to the concerted British efforts to find a way of bringing them down. Of far more impact, however, was how this documentary dealt with the Zeppelin’s place in history… It was a short path from the blimps to Nagasaki.”
Matt Baylis, Daily Express

“We had to listen to endless talk of ‘turning Hollywood fantasy into scientific reality’, right up until the end when Dr Schweitzer broke it to producer/director David Stewart that he had absolutely no chance of ever seeing a T.rex in the flesh. Both programme and science, then, were an anticlimax.”
Paul Kendall, The Telegraph

“A fascinating tale, even if Spielberg might not have gone mad for a scene in which the leg of a stinky ostrich corpse led to a plot twist. Or by his film being more realistically populated, as scientists seemed to suggest, by expressionless giant chickens.”
Alex Hardy, The Times

Under the Dome, Channel 5

“This tale of a town suddenly, mysteriously cut off from the rest of the world by a giant, invisible dome is not just a sci-fi concept but a study of small communities… Perhaps it’s an awful vision of everyone’s future when the oil’s run out and we’re all stranded again in tight, suspicious huddles. For now, at least, we can keep the lights on and enjoy some splendid television.”
Matt Baylis, Daily Express

“‘Architectural history’ hardly sounded like your ideal TV partner for summer’s final day. The title, though, Dreaming the Impossible, sounded like part evangelism, part fantasy novel and part truth – and it delivered on all three counts.”
Alex Hardy, The Times