“No one does small-town paranoia better than Stephen King.” Read on for the verdict on last night’s TV. 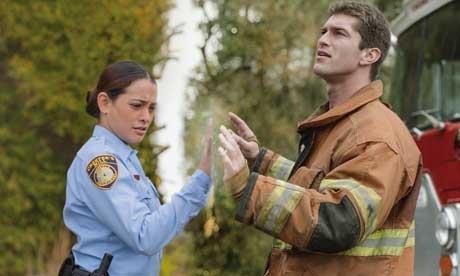 Under the Dome, C5

“You can tell Chester’s Mill isn’t meant to be a real place, not least because it’s clear no one in it has ever seen The Simpsons Movie. That’s not to say I didn’t enjoy its combination of straight-faced hokeyness and gruesome special effects.”
Tim Dowling, The Guardian

“The show’s real power came not from the big moments but from its creeping sense of unease. No one does small-town paranoia better than Stephen King.”
Sarah Hughes, The Independent

“It’s a great sci-fi premise, but surely one with a limited lifespan. As bad as Stephen King endings can be, Under the Dome needs to reach its big reveal before it becomes a show about befuddled people constantly looking up at the sky and bickering about the utilities.”
Ross Jones, The Telegraph

“This is a 13-part series and I can’t wait to find out what happens next. It has quite a pedigree too. Adapted from a Stephen King novel and made by Steven Spielberg’s production company, the surprise would have been if the programme-makers hadn’t pulled it off.”
Virginia Blackburn, Daily Express

“They specialise in terrible puns but there is something deadpan and imperturbable about them that makes them funny anyway. They’re basically The Hairy Bikers with an Indian twist, but that’s not necessarily a criticism. And because the effective use of spices requires rather more knowledge than effort, it’s possible to learn something from them you might actually use later on.”
Tim Dowling, The Guardian

“British food, says the premise of this series, is in need of ‘spicing up’ by a couple of Indian-born livewires. But what could have been a perfectly useful and watchable show about unleashing the power of, say, cloves, instead has the duo clowning around the country for a series of cripplingly forced encounters with stick-in-the-muds whose minds might just be blown by the very idea of ‘spicing up’.”
Ross Jones, The Telegraph

“Benefits Britain 1949 was designed to make things uncomfortable, like a populist 21st-century version of a Brechtian trick. However, the real and awful dissonance was in the programme’s mix of the unremittingly harsh and the really quite tawdry… This misguided experiment was often little more than a highly manipulative fancy-dress party.”
Alex Hardy, The Times

Journey Of My Lifetime, C4

“It was engaging to see the host Ade Adepitan neither sanitised nor sentimentalised by his setting… This was a spirited account of the battle between science and superstition, which despite all optimism and on-hand solutions may take the ‘lifetime’ of the title to resolve.”
Alex Hardy, The Times