“The writing is frankly snore-inducing and the acting is of the Miranda Hart School of Hammy Self-consciousness.” 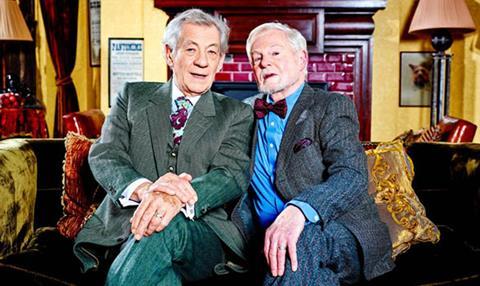 “Despite the stellar cast the writing is frankly snore-inducing and the acting is of the Miranda Hart School of Hammy Self-consciousness. Yet it is refreshing for its staunch refusal to consider the 18-49 demographic that television seems so obsessed by.”
Matilda Battersby, The Independent

“The fact that the roles of Stuart and Freddie are played by Derek Jacobi and Ian McKellen adds lustre. But even their combined acting talents cannot rescue the witless, half-hearted scriptwriting which, on the basis of this second series opener, shows no sign of improvement.”
Sarah Carson, The Telegraph

“Admittedly, I did laugh once or twice but how Derek Jacobi and Ian McKellen got involved with this show, encompassing as it does just about every gay cliché in the book, is beyond me. The best comedy comes from a truthful scenario but there was little of that in last night’s episode.”
Virginia Blackburn, Daily Express

“A celebration of multi-culinary Britain, like a raised middle finger to another Nigel – Farage – though I’m pretty sure Nigel Slater doesn’t do raised fingers, unless it’s to stuff something.”
Sam Wollaston, The Guardian

“This is what happens when Auntie Beeb gets out her sheet of checkboxes and invents a programme by ticking as many as possible in half an hour. Inevitably, when political correctness matters more than content, it wasn’t terribly well thought through.”
Christopher Stevens, Daily Mail

“This delve into the catacombs and underground aqueducts of the Italian capital was Alexander Armstrong’s bid for one of the most coveted sinecures in television — the travelogue presenter. He’s perfect for the job, because he makes us feel that our company is all he requires to complete his happiness.”
Christopher Stevens, Daily Mail

“Most of the really interesting stuff came courtsy of Dr Michael Scott. Armstrong, for his part, was never less than amiable but, amid the limp gags and pootliing around on Vespas, never more than window-dressing to attract a BBC1 audience.”
Gabriel Tate, The Times

“Without Rik Mayall the series flounders. The ratio of wit to puerility was too off balance and the end degenerated into an appalling, smutty farce.”
Sarah Carson,The Telegraph