“If this year throws up a programme more deserving of an hour’s screen time then I’ll be amazed.” Read on for the vercit on last night’s TV. 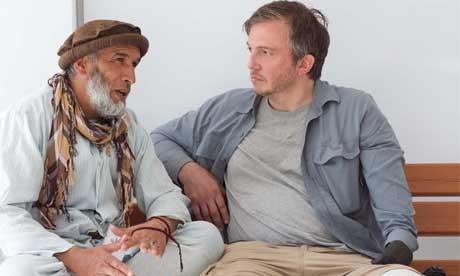 “If this year throws up a programme more deserving of an hour’s screen time than last night’s Walking Wounded: Return to the Frontline then I’ll be amazed… Military operations are filmed these days, using head cameras… The grainy, jerky, amateur footage had an immediacy no director could have devised… This programme was excellent not only because the story is so powerful, and Duley is an engaging and inspiring personality, but because the director-producer Siobhan Sinnerton crafted a beautifully understated piece of work.”
Terry Ramsey, The Telegraph

“What this trip did so well was to capture the intricacies and oddities of the situation Duley and 55,000 Afghans found themselves in as amputees. For Duley, it was strange that no one ever mentioned his arm, just his legs. For two Afghan brothers, they were just desperate for medics to close their wounds, so they could go home and support their eight dependants.”
Alex Hardy, The Times

“It was all the better for the absence of any triumphant heroics that so often accompany such stories. Rather, Duley went out of his way to make it plain that his survival is a daily battle.”
John Crace, The Guardian

“It wasn’t just personal therapy, because Duley’s subject was Afghanistan’s civilian victims, whose prospects and treatment are very different to the level of care Duley received… One young woman, employed by the hospital as part of a deliberate policy to offer some hope to amputees, explained that someone had asked to marry her, but her own family had refused permission because she wouldn’t be a fit mother. She wasn’t the only one to shed tears during this distressing and moving film.”
Tom Sutcliffe, The Independent

Murder on the Victorian Railway, BBC2

“There’s nothing like a crime for cutting a biopsy slice through a society, and this did it very well, connecting wealthy banker to south London prostitute and struggling German immigrants. Filming the reconstruction’s actors in modern-day London both evoked the ghosts of the past that inhabit the city’s streets and made you think about their contemporary equivalents.”
Tom Sutcliffe, The Independent

“There was a good story at the heart of the programme, but it was slowed down by repetition, ponderous plot development and a languid narration. The real problem, though, is that this was one of those films that is simply too long. It would have been much better if it had been able to rattle along at pace.”
Terry Ramsey, The Telegraph

“What with poor German tailors and deaf prostitues and well-off bankers, it provided a perfect snapshot of Victorian London. Regrettably, the decision to act out the court transcripts and newspaper reports, with bit-part actors and some of the worst accents this side of the poorest am-dram society, took much of the punch out of the story.”
Matt Baylis, Daily Express

“There were some nice moments, and there were plenty of inconsistencies in the evidence… Yet, despite the film’s repeated suggestions that the wrong man might have been fingered for the murder, what was not on offer was any serious alternative suspect, which fatally weakened the narrative suspense.”
John Crace, The Guardian

“Izzard is entertaining, and changes in Man, fascinating. But it sometimes felt as if the show was a tenuous construct to link the most titillating bits of human history… Meet the Izzards was an interesting idea but, in practice, its DNA became a little too much like Benny Hill does time travel.”
Alex Hardy, The Times

“Jack drinks, he finds missing people, he winds people up, especially his former colleagues in the Irish police force. He also, happily, represents something entirely different to the quirky, Yeats’-quoting, pub-loving leprechaun shtick that tends to pass for Ireland in the eyes of most British television productions… I’ve never been sure what the Gaelic word craic maens. It seems to be a concept for the walls of fake Irish pubs and ads for the tourist board. If, on the other hand, it means utter absorption in something thoroughly entertaining, Jack Taylor’s your man.”
Matt Baylis, Daily Express