“This was an affectionate, entertaining account, which made me want to look back at the original series, more than forward to next year’s new film.” 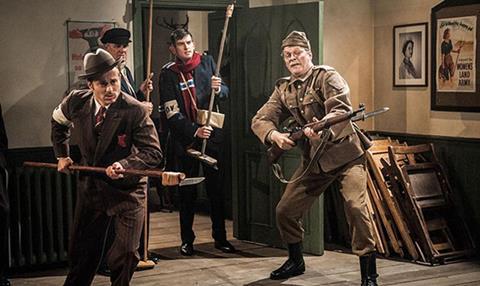 “We’re Doomed! was more than homage, pulling off the impressive feat of being thoughtful as well as funny, pointing up the non-conformist nature of comedy, the peculiarities of personal ambition (it pained Perry to accept that he was better as a writer than he would ever be as an actor) and, perhaps above all, the critical importance of casting when it comes to making great TV comedy.”
Gerard O’Donovan, The Telegraph

“This could have been unbearable. A BBC drama about a great BBC success story of the past; actors playing well-loved actors playing well-loved characters; a warm, sticky, luvvie daisy chain of self-congratulation, and up-its-own-arseness (“they DO like it up ’em!”). In fact, it’s very hard not to like, whether you are Dad’s Army’s biggest fan, and you get all the knowing nods and the winks (not just to DA but to future Perry-Croft collaboration Hi-de-Hi! too) or you’ve never seen a single episode. It is more than a Dad’s Army luv-in, it’s a portrait of a working partnership working very well; two men who weren’t having much fun at all suddenly having a lot of it, making something funny.”
Sam Wollaston, The Guardian

“Classic scenes from the sitcom were used tastefully and sparingly – although, in contrast to this, some of Croft and Perry’s story was hammed up like a Christmas pantry. Their battle with the BBC became, heavy-handedly, a fight against “the enemy within”. The supportive head of comedy, Michael Mills, played by Toast of London’s Harry Peacock, borrowed a little too much from Toast’s thespy intonation and became a piece of comedy himself.

“That was, in the end, by the bye. This was an affectionate, entertaining account, which made me want to look back at the original series, more than forward to next year’s new film.”
Alex Hardy, The Times

“Somehow, though, unlike the troop hired to play the ragbag of Army volunteers, it never quite came together. Paul Ritter’s Perry was too needy and snappy to be likeable. The BBC stuff-shirt types all blended into one, the production hitches weren’t interesting enough. The question we must ask of all tributes and ‘stories of’ is, was that better than watching the real thing? Only, I’d say, if you prefer powdered eggs to real ones.”
Matt Baylis, Daily Express

The Children who Beat Ebola, C4

“It was tough to watch children being exposed to such trauma and grief, often without much support, but the film was all the more powerful for it. And Steele must be commended for his tremendous sensitivity. Now that Sierra Leone has been declared Ebola-free, there was also hope as we watched the boys return to school and be children again.”
The Independent

How the Rich Live Longer, C4

“Really this felt like a less satisfying take on Inside Harley Street, Vanessa Engle’s documentary series this year, which looked at similar high-end services.”
Alex Hardy, The Times