“The TV celebrity equivalent of your friends’ parents showing you their old school photos.” Read on for the verdict on last night’s TV. 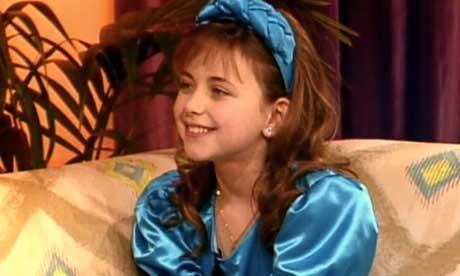 You Saw Them Here First, ITV

“YSTHF’s proudest innovation is a section where the celebs are invited to ‘come face to face with their faces’. This is – if possible – even more horrifying than it sounds. They are invited into the studio, confronted with footage of their younger selves then filmed as they stare into the abyss of mortality. Oh, how cruel the rough winds of time, which shake the darling buds of May!”
Ellen E Jones, The Independent

“The show was at its very worst in the ‘video vault’ sequences, in which Michelle Collins, Eamonn Holmes and Pauline Quirke were plonked in front of footage of their first TV appearances in a recursive MC Escher-style junk-television nightmare. Some things are better left forgotten.”
Tom Meltzer, The Guardian

“The programme refused to acknowledge that we all have to start somewhere. Take the writer of Webb’s put-downs, the remarkably named Will Ing. Research suggests that he once wrote Thomas the Tank Engine.”
Andrew Billen, The Times

“You Saw Them Here First was the TV celebrity equivalent of your friends’ parents showing you their old school photos… Strangest of all was the fact that actress Pauline Quirke once had her own 1976 TV show called Pauline’s Quirks.”
Matt Baylis, Daily Express

“A documentary in name, it was in reality an hour-long paean to that unsung superhero of our crumbling communities: the frontline council worker.”
Ellen E Jones, The Independent

“Among Birmingham’s finest there must be some bloody-minded ASB officers, but we did not see them. Force was the last thing applied. Neighbourhood TLC might have been a fitter name.”
Andrew Billen, The Times

“This hour-long show sagged in parts and with no elimination at the end, it lacked jeopardy. The opening montage of stars to expect elsewhere in the series also left a little to be desired, with household names few and far between. However, this format remained as slickly hypnotic as ever.”
Michael Hogan, The Telegraph

“While the soft-spoken, child-like, almost otherworldly Heatherwick was certainly a character, it was the unstoppable Joanna Lumley who stole the show. She wants to build a bridge over the Thames… I wasn’t quite convinced. But it was hard not to get swept up in the force of one man’s genius and one woman’s boundless confidence.”
Tom Meltzer, The Guardian

“Nigel Havers went clambering towards self-discovery in the upper branches of his family tree, starting with his dad Michael, who was lord chancellor under Margaret Thatcher, and making it as far back as his triple-great-grandfather, a master of coaches running the 19th-century equivalent of London minicab firm Addison Lee… So when, in his closing speech to camera, Havers concluded: ‘As it turns out, I’m no posher than anybody else,’ it made you wonder if he had listened to a single thing.”
Tom Meltzer, The Guardian

“Despite the warmer moments, you are never allowed to forget that most gangsters are basically rotten, scary people who are dangerous to be friends with and toxic to be around.”
Matt Baylis, Daily Express