8 Days: To the Moon and Back; The Left Behind

“A masterclass of seamless editing, it was engrossing, emotive and visually stunning.” 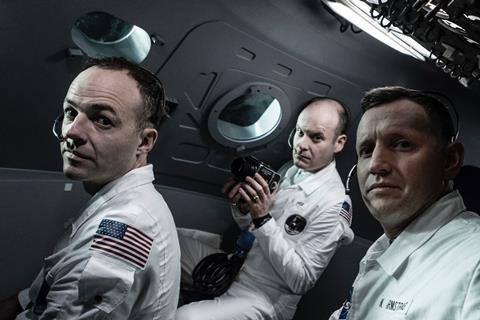 “There’s a veritable space race of programming to mark the 50th anniversary of the moon landings, but the breathtaking docudrama 8 Days: To the Moon and Back will surely go down as the best. A masterclass of seamless editing, it was engrossing, emotive and visually stunning. Surprisingly tense, too, considering we knew the outcome.”
Michael Hogan, The Telegraph

“I feared that the show, in which the declassified audio from the cockpit was lip-synced by actors for a drama documentary, might look over-primped. I was wrong: it was breathtaking. And strangely moving. Even though you knew they were actors, it felt real.”
Carol Midgely, The Times

“Despite the lighter moments, the format drives home how dangerous the journey was, and the skill required of the pilots, especially during the return to Earth, in which a last-minute technical failure nearly left Armstrong and Aldrin stranded on the Moon’s surface inside the lunar module.”
Barbara Speed, The i

“Someone at NASA must have gone up into the attic to drag down a faulty old reel-to-reel, because the quality of the sound varied from incomprehensible to crystal clear. Sometimes it seemed as though the astronauts were sitting beside us. Collins’s heartfelt exclamation as he watched the sun rise over a distant Earth gave me shivers: ‘God damn, that’s pretty!’”
Christopher Stevens, Daily Mail

The Left Behind, BBC1

“I wasn’t entirely convinced that, having been made homeless, Gethin would make the leap so swiftly to donning a pig mask and firebombing a halal butcher’s, especially when he was sweet on a Muslim girl whose brother ran it, but maybe the point was to show how fast radicalisation can happen. A scene in which a councillor felt the locals’ wrath over the lack of social housing was visceral, as was Gethin weeping in the housing office.”
Carol Midgely, The Times

“It’s hard to tell a story this complex inside an hour, and the time frame, in which Gethin is radicalised within a month via a few chats in the pub and far-right Twitter feeds, is a little hard to credit. But Bullman and Harris have pulled off a remarkable balancing act, in which Gethin is not excused for his actions, but nor is he totally demonised.”
Barbara Speed, The i

“Gethin took his vengeance by donning a plastic pig’s mask and burning down a halal butcher’s shop. The rest of the time, he took drugs or sat in the pub with his mates, spouting dialogue that was apparently cut-and-pasted from a pamphlet from Corbyn’s Labour Party.”
Christopher Stevens, Daily Mail

“The script lacked nuance and the supporting performances felt a tad Children’s Film Foundation at times. Yet it was, none the less, an undeniably powerful depiction of a very real issue.”
Michael Hogan, The Telegraph