“In more than 60 years of wildlife broadcasting, Sir David has never made anything quite like this. It was often difficult to watch, but it was a story that had to be told.” 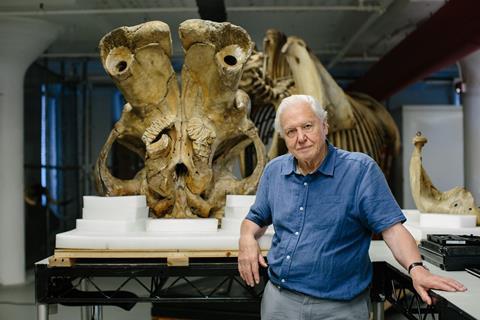 Attenborough and the Giant Elephant, BBC1

“Attenborough grabbed our attention from the off, promising a story of a giant among African elephants, loved by millions but whose life was ‘troubled, fuelled by alcohol, terrifying fits of violence, a near-mystical relationship with his keeper and a tragic end that seems hard to believe.’ And he delivered: taking us through Jumbo’s extraordinary by any standards 25 or so years on this planet.”
Gerard O’Donovan, The Telegraph

“Attenborough And The Giant Elephant offered very little hope. It was a tale to empty you of all faith in humanity — a catalogue of appalling greed, ignorance and mistreatment. In more than 60 years of wildlife broadcasting, Sir David has never made anything quite like this. It was often difficult to watch, but it was a story that had to be told.”
Christopher Stevens, Daily Mail

“Piecing together the hidden story, Attenborough went everywhere – from the memoirs of Jumbo’s keeper and the chemical make-up of his bones to the expert teams caring for modern-day jumbos at Amboseli National Park in Kenya. We are learning more now about these beautiful, complex beasts and how important it is to keep them in their natural habitat. That is a journey that could not have started without a ride on Jumbo’s back.”
Matt Baylis, Daily Express

“I wasn’t too sure what the overall point was, other than to pat ourselves on the back for not exploiting and mistreating animals so much any more. But it was another handsomely done BBC treat for wildlife footage junkies, with plenty of classic Natural History Unit shots of the magnificent creatures where they belong – with their own kind, in a wide open space.”
Jeff Robson, The i

“Blue Planet II has shown us the glorious creatures of the oceans — and in the final episode it showed how we are annihilating them. While the other episodes left me feeling uplifted, this one left me feeling depressed and angry — and I’m glad. To have given us the thrills without the hard truth would have been irresponsible.”
Carol Midgley, The Times

“It is a mark of his genius as a communicator that he left us with a message of hope and encouragement, rather than one of doom and despair. Nudging us towards positive action, rather than whacking us over the head with a cudgel of blame. Ultimately, Attenborough’s own embodiment of enlightened humanity is the inspirational, and aspirational, image we were left with.”
Gerard O’Donovan, The Telegraph

“It is extraordinary and brilliant watching Noakes’s Blue Peter stunts today. Watching this is just like bumping into a childhood friend and immediately re-clicking, a reminder of why and how much you liked them in the first place.”
Sam Wollaston, The Guardian

“This was a terrific tribute to a unique star — and a salute to an era of recklessly entertaining telly that is long gone. It’s just a shame that many of the clips were so well-known. There must be dozens more in the archives just as good.”
Christopher Stevens, Daily Mail