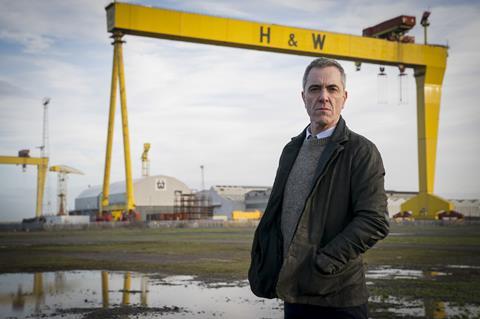 “Bloodlands is shaping up to be a fine addition to the growing genre of Irish noir, which draws power from its concentration on place as well as plot. And it stands as an enjoyably dense and astute thriller (with enough black humour threaded through to let it breathe) in its own right.”
Lucy Mangan, The Guardian

“I watched the first half of Bloodlands with a sense of ‘been here, done this’ ennui. Once it had laid all the groundwork and established that DCI Tom Brannick (Nesbitt) was a great single dad to his daughter, Izzy (Lola Petticrew), it picked up considerably. It’s not Line of Duty, nowhere near, but it gets extra oomph from Lorcan Cranitch, who put in some excellent swearing as the police-boss-with-something-to-hide, and Charlene McKenna as Tom’s trusty sidekick. Predictable, but, from this point, promising.”
Carol Midgley, The Times

“With strong casting, great music and brooding shots of steely Northern Irish seas, the four-parter looked every bit the slick Sunday-night detective series. In the first episode at least, however, the nuts and bolts didn’t quite live up to its glossy packaging. Nevertheless, the programme thrummed with tension as it examined the hangover of the Troubles and the characters were compelling.”
Gwendolyn Smith, The i

“You don’t know who to trust, none of the characters ever smile, and senior detectives spend their time looking broodily out of windows. The drama is written by Chris Brandon, but his script has been Mercurio-ed to within an inch of its life. Perhaps it began life as a serious meditation on the shadows cast by the Troubles, but what we got was a jolting thriller laced with clues laid for us to solve.”
Anita Singh, The Telegraph

“The plot doesn’t make a lot of sense, though it rattles along so briskly that we don’t have to worry too much. Bloodlands won’t be the most memorable serial of the year… but the Northern Ireland Tourist Board will be quite glad about that.”
Christopher Stevens, Daily Mail

“Chris Packham’s Animal Einsteins was a pleasure to watch, not least because it challenged our arrogant view that humans always have the monopoly on intelligence. I do love seeing Packham interacting with animals and here he was in his element swooning over Bran the handsome raven.”
Carol Midgley, The Times

“The show had an air of being cobbled together. Footage of chimps memorising the locations of numbers on a touch screen was impressive but from 2007. There was plenty here to keep younger minds amused. But this series feels like BBC filler until the next Attenborough blockbuster comes along.”
Anita Singh, The Telegraph

“He’s good at boiling down complex phenomena into simple terms, but here this sometimes tipped into twee anthropomorphising. The irony of Packham telling viewers that we must ditch our human perspective when discussing animal intelligence in a programme whose title refers to animal ‘Einsteins’ also seemed to have been lost. Still, this was an entertaining hour.”
Gwendolyn Smith, The i