Britney; Who Do You Think You Are; The Big Leap 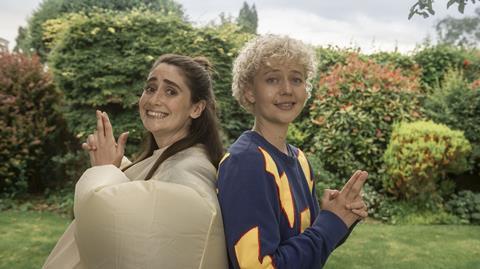 “Britney seemed more of a “joycom”, despite revealing a premise potentially as bleak as any weepie of the week. Quite an achievement, and not what you might expect from a brief pilot that started out like a kooky rom-com about girly BFFs…Cue hyperreal visual flourishes and a tone switching on a sixpence between goofy joy and a sense of dread — and suddenly it was over, having fully earned a burning itch to find out what happened next. All in 20 minutes flat, which is going some.”
James Jackson, The Times

“Only two minutes in, their ferocious admiration for one another and quick back-and-forth made for one of the most accurate and loving depictions of young friendship I’ve ever seen on TV…It was ferociously funny, heart-wrenching and honest, and the sort of programme that makes me thrilled BBC Three is coming back to television in February – Britney deserves the widest audience possible.“
Emily Baker, The i

“Clive and Robertson’s chemistry is undeniable; they perform with the warmth and wit of two people who’ve been finishing each other’s sentences for 15 years. Clive, who was exceptional in the Channel 4 OCD drama Pure, gives an equally sensitive performance here. And Robertson has a natural comic touch, her micro-expressions and delivery landing effortlessly.”
Ellie Harrison, The Independent

“ Watching Balls’s smiley demeanour wobble as he wrestled with the behaviour of these two men was part of the fun of a terrific episode. Were they heroes or villains? Dunbar may have been dubiously priapic, but he wasn’t short of bravery.…after his journey of discovery Balls now knows where he got his political fire.”
James Jackson, The Times

“The story on his mother’s side was happier: he was ecstatic to find he is descended from an activist indicted for setting his boss’s farm alight in protest against poor working conditions.The emotional punch came when he shared how proud his mother, who has dementia and struggles to communicate, would have been. This finale proved that all history needs is a good story to reel you in.”
Emily Baker, The i

”The show-show doesn’t bother to hide its influences, but weaves them into something bold and colourful of its own. Its unflagging energy, as well as the official and impromptu dance scenes, remind you of Glee, but its witty, intelligent Pitch Perfect vibe prevents it becoming as emetic. It’s Unreal with heart and without the depth of cynicism. It offers an hour or so of realistic escapism, which is probably the best the market can bear at the moment…not (yet) been ground down by the system he now finds himself working in. It feels like a programme about second rather than last chances, and is all the better for it. It’s also just funny. There’s nothing I love more than a comedy montage scene of auditions, and The Big Leap makes it into my personal pantheon of greats”
Lucy Mangan, The Guardian