Farage: The Man Who Made Brexit; Next in Fashion; Easy Ways to Live Well; Great Pottery Throw Down

“This was a hoot, not least because it had Farage bitching like a bosomy fishwife” 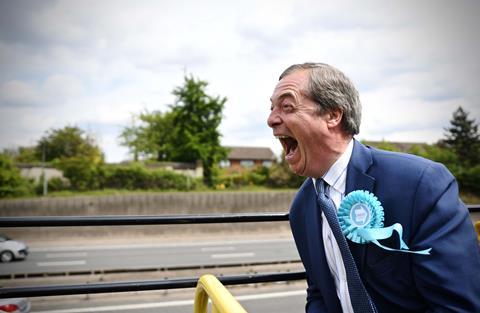 Farage: The Man Who Made Brexit, Channel 4

“Probably like you, I have severe Brexit documentary fatigue, but this was a hoot, not least because it had Farage bitching like a bosomy fishwife. Farage is a film-maker’s dream; soundbite-ready, rising to the bait and a generous interviewee who wears his heart on his sleeve.”
Carol Midgley, The Times

“When the election loomed, the fly-on-the-wall access made Farage’s slow-motion campaign collapse excruciating to watch. The film was highly engaging.”
Asa Bennett, The Telegraph

“Farage’s belief that he was owed by those currently in power was a central theme. Yet it was hard to escape the notion that even if Farage did hold the power, he wouldn’t know what to do with it.”
Sarah Hughes, The i

Next in Fashion, Netflix

“Yes, I thought, this is just a Project Runway knock-off, isn’t it? And I was wrong. Rather than focus on the drama and the petty squabbling, Next in Fashion celebrates craftsmanship. It is also more aware than Project Runway ever was, with plus-size models and reflections on sustainability.”
Sarah Hughes, The i

“It works a treat. It’s just tense enough, and just gripping enough, to warrant a binge-watch. Having Alexa Chung and Tan France in charge tempers everything and ensures the tone is just right. Netflix really is starting to get the hang of this kind of show.”
Rebecca Nicholson, The Guardian

“These types of health documentary are always exhaustingly upbeat, but Steph McGovern and Hugh Fearnley-Whittingstall might just have a winning yin-and-yang chemistry.”
Carol Midgley, The Times

“Since the bosses are clueless, and the presenters haven’t been picked for any particular expertise, you wouldn’t expect any insights or useful information from Easy Ways To Live Well. And you’d be right. It’s pointless.”
Christopher Stevens, Daily Mail

The Great Pottery Throw Down, More 4

“This clay-spinning challenge is better suited to one of Channel 4’s overspill stations. It’s better for being a little spikier too. But there’s still too much emphasis on laboured double entendres and lumps of sloppy clay plopping to the floor.”
Christopher Stevens, Daily Mail