“Splendidly entertaining, even to a non-football fan such as me” 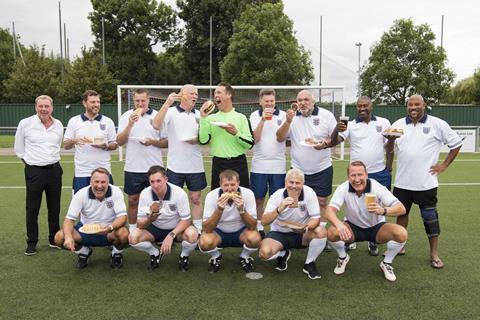 “I had assumed that this would be just a low-budget ITV old lags’ nostalgia fest, but do you know what? It was splendidly entertaining, even to a non-football fan such as me, largely because, to their credit, these former sports gods were happy to laugh at themselves.”
Carol Midgley, The Times

“Sure, at a football-friendly duration of 90 minutes, it was more stretched than Razor Ruddock’s shorts. Yet Harry’s Heroes glowed with so much camaraderie, warmth and nostalgia, it was impossible to mind much. I’ll be tuning in tonight to see if the retired Three Lions can beat their nemesis.”
Michael Hogan, The Telegraph

“I love this kind of thing – all ‘Three Lions’ and ‘World in Motion’ and 50 years of hurt and camaraderie and righting the wrongs of Italia ’90. So I’m not surprised at how thoroughly entertained I was as they took on the challenge. What did surprise me was the lack of hyper-masculine posturing, combative banter and competitiveness in this first of two episodes. Films like this, that help to dismantle a culture that for too long has demanded men hide their vulnerability, are a sea change. Bravo.”
Sarah Carson, The i

“Any show that has former football stars re-recording their World Cup pop song deserves one star and a savaging. But the rest of this light-hearted fitness documentary was fairly entertaining — and an innovative approach to health education for the middle-aged man.”
Christopher Stevens, Daily Mail

“Their midlife struggles will resonate across England as middle-aged men battle the bodily sagathon and, through such initiatives as Man v Fat, roll back the footballing years. But glory days are not easily repeated.”
Stuart Jeffries, The Guardian

“This series is far less filthy (flatulence in the lift aside) than the last. Filth has been replaced with profundity; these episodes are lush and rich, with fewer gags. It takes great talent to write something that is painful and funny simultaneously. Fleabag’s awards are, surely, in the bag.”
Carol Midgley, The Times

The Choir: Our School By The Tower, BBC2

“This was very much a ‘making of a school musical’ documentary. If you don’t have the patience to watch a class sitting round a piano, trying out variations until something sounds right, this might have seemed slow. But it was full of gentle inspiration.”
Christopher Stevens, Daily Mail