“It was splendid in a downbeat, understated, attention-to-detail way” 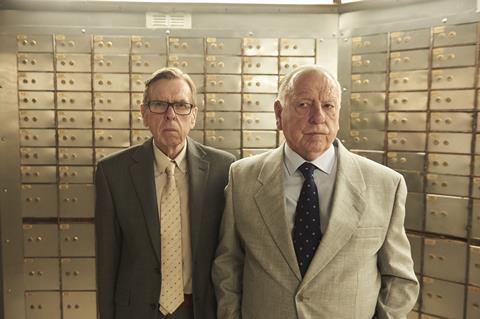 “Although we have waited two years for this drama because of legal reasons, it was splendid in a downbeat, understated, attention-to-detail way. I liked that the drama didn’t romanticise them into cor-blimey loveable rogues, instead showing us cantankerous, selfish, petty, stubborn and rather nasty criminals who bickered like children over who would sit in the back of the van.”
Carol Midgley, The Times

“Worth the wait? Not really. The cast is well chosen. There is an enjoyably Dad’s Army-esque camaraderie and competition between Terry and the heist’s mastermind, Brian. But these are rare moments of humanity in what is otherwise a curiously flat drama.”
Barbara Speed, The i

“The drama did a good job of sustaining tension when we all know that they got away with the burglary until someone blabbed about it down the pub. The acting was superb, too, although I’ll never quite get used to the thinner Timothy Spall: he looks like he’s missing about 30 per cent of himself.”
Tim Stanley, The Telegraph

“Jeff Pope revelled in the bitter Beckettian comedy of ageing. Pope was also savvy in precisely situating the drama on the Easter weekend of 2015. If only the Hatton Garden gang had displayed such attention to detail.”
Stuart Jeffries, The Guardian

“It’s a mistake to imagine these old codgers were lovable just because they’d reached an age when they couldn’t pull an all-night bank job without constantly nipping out to the loo. As it was with the Great Train Robbers and the Krays, telly too easily pretends that men like these are harmless rascals. They never were.”
Christopher Stevens, Daily Mail

“Who else, while watching Thatcher: A Very British Revolution, wondered how the TV memoir of our other female prime minister might look in comparison? Theresa May’s would struggle to stretch to one decent episode, never mind five. Nor would it be as fascinating, which, whatever you thought of Margaret Thatcher, this was.”
Carol Midgley, The Times

“Thatcherism as an inside job isn’t an original thesis, but what worked well was the return to primary sources. No subjective punditry by historians, just interviews with her critics and accomplices – and archival footage that we’ve seen before but, for the first time, with scant editing. The result was that you could really soak up the Seventies.”
Tim Stanley, The Telegraph

“Thatcher: A Very British Revolution transported us to telly heaven with a cavalcade of small-screen greats showing us history as it happened. If this series can maintain its sky-high standard of contributors and analysis, it promises to be one of the finest political portraits ever made for TV.”
Christopher Stevens, Daily Mail