“Though it is obviously kind, it is not soft-focus or fluffy. It is precise and convincing, addressing the many responses that the public may have when a famous person comes out of the closet” 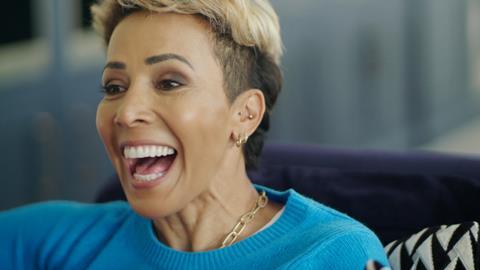 Kelly Holmes: Being Me, ITV

“Having been private for so many years, Being Me affords Holmes an opportunity to tell her story on her own terms. There might be an expectation, then, that this is a sanitised version of events. Though it is obviously kind, it is not soft-focus or fluffy. It is precise and convincing, addressing the many responses that the public may have when a famous person comes out of the closet.”
Rebecca Nicholson, The Guardian

“You may have felt, admittedly as did I, that it was no big deal when Dame Kelly Holmes came out as gay last week at the age of 52. I mean, who cares in these more enlightened times? But within five minutes of watching Kelly Holmes: Being Me it became obvious it was a very big deal indeed. The massive toll that keeping the secret had taken, causing her to self-harm and have suicidal thoughts, was clear from her nervous energy and frequent tears. That the armed forces could embed such institutionalised terror in people that it was still festering three decades later tells us just how toxic that culture was.”
Carol Midgley, The Times

“Her courage in coming out will be an inspiration for many people. But it was also moving and sad to see the vulnerability of a woman who is known for being so physically strong.”
Christopher Stevens, Daily Mail

Murder in the Alps, Channel 4

“It is a baffling story ripe for repeated rehashing, not least because the killer is still at large and because the French police seemed so hopeless that for eight hours while they were examining the crime scene they didn’t notice a four-year-old girl, alive and cowering under her mother’s skirt in the footwell. Quite a miss. I recommend watching ahead as the unexpected twists and florid theories are gobsmacking, although whether it needs three hours to tell them is another matter.”
Carol Midgley, The Times

“There’s a phenomenon known as ‘Netflix bloat’, where the streaming service fails to edit shows down, seemingly for the sake of retaining eyeballs. This was the terrestrial equivalent. The narrative was repetitive, the pacing ponderous. A story that could have been told in 60 minutes instead stretched across three ultimately unfulfilling hours.”
Michael Hogan, The Telegraph

Eddie Hall: The Beast vs The Mountain, BBC3

“Come fight night, this admirable film – made by Louis Theroux’s company – faltered. Shoddy action photography only made you appreciate how well the sports channels do it. The film was a little too in thrall to hype, money and social media bluster.”
Michael Hogan, The Telegraph

“There was little in the first episode of Lost Treasures Of Rome that could inspire anyone to tune in to the rest of this six-part archaeology series. But viewers might feel inspired to sue the producers for a breach of the Trade Descriptions Act, since there were no treasures and we weren’t in Rome. Instead, the diggers poked around under the baths in Pompeii, finding a broken safety pin and part of a bull’s skull.”
Christopher Stevens, Daily Mail