“Louis Theroux: Dark States sees him back at his best – using his talent for patient, non-judgemental questioning to coax revealing testimony from his interviewees.” 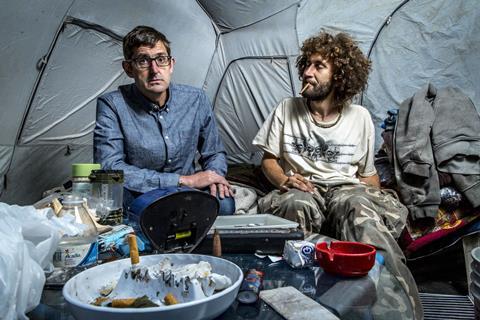 “By the end I felt like rolling up a sleeve and shooting up myself. By God, it was sad. It’s incredible that people agree to be filmed like this, stabbing needles in their scabby arms and getting high on camera, but gaining trust is Theroux’s skill.”
Carol Midgley, The Times

“Somehow, they all open up to the Englishman with the awkward demeanour. It’s as if he knows where the invisible string in their backs is, which he pulls to make them talk. Or perhaps it’s just that look he has: tell me about it. And they do; they might lie to their families, and to themselves, but to Louis they tell it like it is.”
Sam Wollaston, The Guardian

“I’m happy to report that Louis Theroux: Dark States sees him back at his best – using his talent for patient, non-judgemental questioning to coax revealing testimony from his interviewees. Theroux’s faux naif persona sometimes grated, but for the most part he played to his strengths – knowing when to ask the right question, and when to stay quiet.”
Jeff Robson, The i

“What was affecting were not so much the individual tales of addiction as the staggering scale of the problem, the incomprehensible extent of it. Though why everywhere else in the US doesn’t have as dramatic a drug problem as Huntington was not explored. As ever with Theroux, all we were presented with was the situation – the possible solutions we were left to ponder for ourselves.”
Gerard O’Donovan, The Telegraph

“This three-part series, made by the BBC Studios Documentary Unit and thus funded by the Beeb’s licence payers, explores the underbelly of U.S. society. It can be fascinating, but it’s undeniably remote. Why can’t Louis confront the synthetic ‘spice’ epidemic in Liverpool or Cardiff instead?”
Christopher Stevens, Daily Mail

“I do wonder if the various complex vying storylines, which I found at times hard to follow, will test viewers’ patience over ten episodes. Still, at least it’s sumptuous to watch.”
Carol Midgley, The Times

“It’s slick and breezy – far too enamoured with its roguish characters to do justice to a cathartic chapter in the history of modern Los Angeles. But the show has a giddy energy and, amid the blizzard of gangster clichés, Brit Damson Idris shines brightly as a star in the making.”
Ed Power, The Telegraph

“I barely broke into a titter through the whole thirty minutes. The performances were solid enough – Kevin Bishop has some of Ronnie Barker’s wry, engaging charm and Mark Bonnar’s head warder was a less shouty, more acerbic heir to Fulton Mackay. But for anyone with memories of the original, this was pretty thin gruel.”
Jeff Robson, The i

“Watching the new Porridge is like visiting a favourite old café only to find that its best bits have been jettisoned: the tomato-shaped ketchup bottles have been replaced by sachets, the Formica tables by stripped pine. Sometimes the past is best left alone.”
Ben Lawrence, The Telegraph