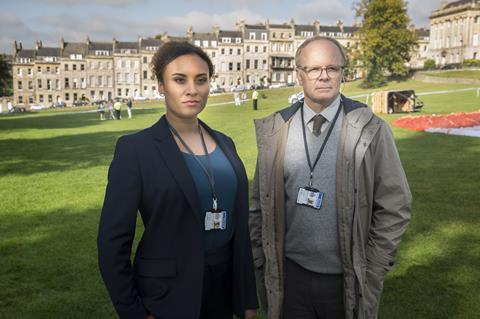 “This is British crime drama with a cartoonish glow and it is practically allergic to bleakness. The relationship between the leads anchors the madcap nature of it all nicely. Sometimes, a lightness of touch sits uncomfortably in a crime drama, but the fact that this doesn’t take itself too seriously really works.”
Rebecca Nicholson, The Guardian

“Episode one was so deliberately hammy and meta that, technically, it should have been a complete horlicks. But I was pleasantly sucked into its cheerful escapism and self-mockery, even though at two hours it was far too long. Maybe in lockdown I’m more easily pleased, but if it is positioning itself as a sort of Death in Paradise in Bath then it’s a good move.”
Carol Midgley, The Times

“Implausible, dazzling, full of weird twists – and that was just Martin Kemp’s hair. The episode was almost as entertaining, even if the supposed mismatched chemistry between the lead characters never truly manifested. Gentle pacing and acting more over the top than Spandau Ballet’s greatest hits made for a satisfying serving of suppertime hokum.”
Ed Power, The Telegraph

“An all-star mystery so improbable it makes Midsomer Murders seem like a true-crime podcast. Condensed to 60 minutes, this froth would be mildly distracting and sometimes entertaining. But stretched across two hours, it became dull well before the end.”
Christopher Stevens, Daily Mail

“It kept me very happily occupied for most of two hours, much against my better judgement, and almost against my will. I was carried along like the five amigos in their deadly hot air balloon ride across the Somerset hills, with little control over my compulsion to solve a puzzle that wasn’t worth solving. It’s Sunday night ITV escapism at its best.”
Sean O’Grady, The Independent

“Life in Colour was an optical treat, no depressing news about how we have trashed the planet, no kills, no starving polar bears. Here was a kaleidoscope of rainbow-coloured beauty in the natural world. I cannot pretend to have understood everything he was saying about polarised light and the newly developed cameras being used, but it was a lovely hour.”
Carol Midgley, The Times

“There was absolutely nothing glum about this episode. We saw scarlet macaws, hummingbirds and butterflies, mantis shrimp and harlequin tusk fish, all in gloriously vivid colour. Attenborough remains the absolute master when it comes to narration. He never says too much, his explanations are concise and clear, and he’s still marvelling at the world after all these years.”
Anita Singh, The Telegraph

“Attenborough’s Life in Colour was a celebration of nature not only red in tooth and claw but every other colour in the rainbow. It was also a chance to show off camera technology that enables us to see as butterflies and sand crabs do. Those male peacocks didn’t disappoint but best of all were the bright orange fiddler crabs, wrestling like Hugh Grant and Colin Firth in the Bridget Jones movies.”
Gerard Gilbert, The i