Meet the Richardsons; 10 Years Younger in 10 Days; Death in Paradise 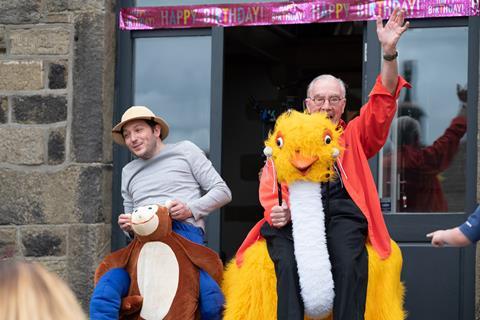 “I laughed more at this than at the strangely unfunny latest series of Curb Your Enthusiasm. I liked Beaumont taking the mick out of her husband for his bald patch and for being paranoid about Rob Beckett taking his team captain job on 8 Out of 10 Cats. For how long it will remain funny is another question.”
Carol Midgley, The Times

“Meet the Richardsons purports to be a portrait of Jon’s married life with fellow comic Lucy Beaumont. In fact, it’s a drearily laboured sitcom that tries to ape Lee Mack’s Not Going Out — and fails. This new mockumentary feels as if every line has been subjected to five different laughter formulas, until all the spontaneity has been beaten out of it.”
Christopher Stevens, Daily Mail

“10 Years Younger is back this time on Channel 5 and under a new guise as 10 Years Younger in 10 Days. But has the scruffy old bag let herself go? The show’s method for assigning initial age estimates has not changed. It involves dressing the participant in her least flattering outfit, then taking her to a busy public area and inviting criticism from passersby. Surely, if a woman these days wants to hear what 100 mean strangers think of her face, hair and body she can just go on Twitter?”
Ellen E Jones, The Guardian

“This series of Death In Paradise has managed the tricky transition from Ardal O’Hanlon’s laid-back DI Mooney to the twitching, neurotic, hypochondriac DI Parker, and done it as smoothly as a luxury hotel waves goodbye to one VIP customer while another checks in.”
Christopher Stevens, Daily Mail

“I don’t see Ralf Little overtaking Ben Miller, Kris Marshall or Ardal O’Hanlon in my affections yet, but admittedly it’s early days. When he returns next series, let’s hope the plots improve along with his allergies.”
Anita Singh, The Telegraph