“The writing was as sharp as ever” 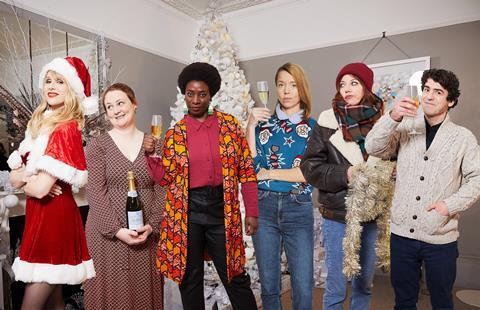 “Anna Maxwell Martin gave one of her best Motherland performances as harassed, knackered, ultra-cynical Julia with the selfish husband. She greeted her father-in-law’s shouted question “Are we eating today?” with a muttered “You coffin-dodging old shit.” When her mother asked if she had any softer towels she went into a most excellent tirade of sarcasm, offering to take out her towel loom and “weave you one from the hairs on a baby’s arsehole”. Great writing.”
Carol Midgley, The Times

“The writing was as sharp as ever. And if you’re a person who usually does all the heavy-lifting for your family at Christmas and is secretly relieved that this year it’s two of you and the dog, I hope that the sight of Julia having a nervous breakdown while cooking, cleaning and “basically being a Christmas servant” brought a smile to your face.”
Anita Singh, Telegraph

“While other shows ram home messages of love, joy and goodwill to all men, Motherland isn’t afraid to admit that Christmas is often bloody hard for mothers. It’s a strong dose of reality in a sea of schmaltz – bring on series three.”
Emily Baker, The i

“Mike’s strop over his parents’ helpfulness was a bit silly and dull and the carol singing at the end was sentimental, but the central theme was a subtle, perfectly judged Christmas message. And it’s not often you can say that.”
Carol Midgley, The Times

“Writers Simon Farnaby and Ben Willbond (also starring as ghosts Julian and Captain) commendably tried to give every cast member a slice of the action, but storylines were short and weak as a result – it was hard to care about Fanny’s (Martha Howe-Douglas) desperation to decorate the tree when also trying to keep up with Mike’s annual Christmas tantrum and Julian’s exasperation at sharing his room with a crying baby.”
Emily Baker, The i

“This delightful edition of the spooky sitcom from the Horrible Histories team was one of the sweetest, funniest and all-round most satisfying festive specials you’ll see in a year when Yuletide televisual treats are thin on the ground. This was cockle-warming, crowd-pleasing fun for all the family.”
Michael Hogan, Telegraph

“There was the germ of a good idea in this unusual chat show set-up. There’s an intimacy to two people in a car, an enforced closeness and sense of being in a bubble – a feeling exploited by the likes of James Corden’s Carpool Karaoke and Peter Kay’s Car Share. Yet despite the combined star power of Saunders and [Michael] Sheen, it somehow felt like a daytime TV show had washed up in primetime. Copious recaps and on-screen quotations reinforced this impression. I half-expected the duo to suddenly view some properties or stop off at an antiques auction.”
Michael Hogan, Telegraph

“Dear Santa, all I want for Christmas is a world where every celebrity interviewee natters away like Michael Sheen. How easy the life of a showbiz journo would be then. The star of Good Omens, Frost/Nixon and The Queen, whose impersonations of Tony Blair are fabled, slid into the passenger seat of Jennifer Saunders’s E-Type Jaguar on Memory Lane. He started talking. He didn’t stop. The hour was a flood of funny voices, poignant reminiscences, knowing confessions, gentle reflections and constant wit.”
Christopher Stevens, Daily Mail

“It’s quite possible that this was your first encounter with King Gary - it has only run for one series, although a second is scheduled for 2021. It may not be top-tier Christmas fare but it’s a decent, warm-hearted show that understands the basics of a good sitcom - one-upmanship, slapstick and silly misunderstandings - albeit one that could do with some more jokes; at the moment it relies too much on our affection for characters we don’t know that well.”
Anita Singh, Telegraph