“The blurb says it is Black Swan for orchestras. It is more like Mean Girls with pretensions” 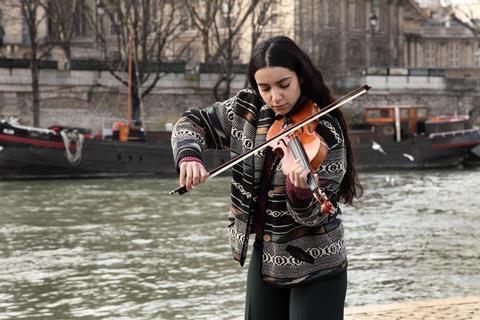 “I love Philharmonia, the latest subtitled Euro-posh from Channel 4’s offshoot Walter Presents, for all the wrong reasons. Philharmonia makes previous classical music dramas such as Un Coeur en Hiver and The Piano Teacher seem sensible. The blurb says it is Black Swan for orchestras. It is more like Acorn Antiques with subtitles or Mean Girls with pretensions.”
Stuart Jeffries, The Guardian

“Marine Gacem’s psychological thriller is quality escapism. It centred on an orchestra full of clashing egos and deadwood that gets a rocket up its arse when the conductor drops dead mid-performance and a woman is flown over from New York to replace him. Hélène Barizet (Marie-Sophie Ferdane) was a terrific, inscrutable take-no-shit maverick who kept a revolver in her drawer and a secret close to her chest. I enjoyed it very much, particularly that the lovely music is central to the story.”
Caroline Midgley, The Times

“The word “soapy” is often used to describe television lacking depth. But it is exactly what keeps French drama Philharmonia, the latest offering from Channel 4’s foreign language strand Walter Presents, so intriguing. A series that centres on the inner workings of a national philharmonic orchestra may seem a little lofty, particularly if broadcast late on a Sunday evening, but throw in an affair, a psychotic illness and a secretive gun and I’m all in. Philharmonia sits comfortably alongside Doctor Foster and Bancroft in its portrayal of imperfect women and deserves to be just as lauded.”
Emily Baker, The i

“It’s not a farce, though it has lots of things going wrong and Naird (Carrell) rushing around in a manner unbecoming to his dignity. Except that he doesn’t have any dignity. He is, for the most part, a buffoon but with enough moments of competence to confuse the issue. It’s a little bit like a workplace parody, except that the core group isn’t big or stable enough to allow relationships to develop.”
Lucy Mangan, The Guardian

“Like the real-life space agency it portrays, astronaut sitcom Space Force is ambitious, glamorous and eye-wateringly expensive. Unfortunately, it fails to achieve full lift-off. Carell’s character is a satirical riff on real-life equivalent John W Raymond, while the premise takes aim at President Trump’s rekindled space race and its controversially huge budget. Indeed, potshots at Trump fly thick and fast. He’s only ever referred to as “POTUS” but there’s no doubt who the petulant, posturing, Twitter-addicted premier running a “chaotic administration” is supposed to spoof.”
Michael Hogan, The Telegraph

“The first episode is sharp, looking at the genesis of the newfound branch of the armed forces and swiftly moving on to the launch of its first satellite. Within two minutes of the second episode, however, all hope is lost. What starts as a funny, mischievous series quickly descends into farce when a monkey and a dog are called upon to fix a satellite purposefully broken by a Chinese spacecraft. Any fans hoping for a second round of The Office (Space Force is created by Carrell and Greg Daniels, the man who adapted the UK series into the cult US version) will be bitterly disappointed.”
Emily Baker, The i

Ella Fitzgerald: Just One of Those Things, BBC2

“For jazz aficionados, there was nothing new here and perhaps some areas could have been explored in greater depth - her collaborations with Louis Armstrong, for example, were relegated to a photograph. But within the constraints of a 90-minute film, it did Fitzgerald justice. And it sounded gorgeous.”
Anita Singh, The Telegraph

“This respectful documentary put a lot of emphasis on Ella’s determination to break free from poverty, after a childhood of dancing in the New York streets for pennies and a spell in reform school. What it didn’t manage to explain was the innocence in her voice. Where Frank Sinatra could take a song like I’ve Got You Under My Skin and make it sleazy, Ella imbued it with fairytale romance.”
Christopher Stevens, Daily Mail

“I came to the documentary knowing nothing about the twins, and expected it to be a difficult, upsetting tale of gruelling operations and heartbroken parents. But it was nothing of the sort. Carmen and Lupita are, in many respects, typical teenagers: funny, opinionated and desperate to pass their driving test so they can go for nights out with friends. “Just two more kids in America trying to live our best lives.” It was genuinely life-affirming stuff.”
Anita Singh, The Telegraph