“As launch nights go, it was a purring Rolls-Royce to GB News’ sputtering Robin Reliant” 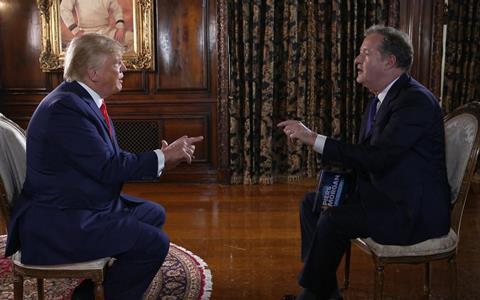 “Recorded at Trump’s Mar-a-Lago resort in Palm Beach, this fight for the World Heavyweight Orange-Skinned Narcissist title brought publicity and clicks for Talk TV, but lacked news value due to Trump’s current status as an amateur golfer in Florida. Morgan, not for the first time, seemed more interested in his own contributions than his guest’s. On this early evidence, Talk TV is much slicker than GB News but far less resourced and rigorous than Sky News.”
Mark Lawson, The Guardian

“TalkTV was once touted as Rupert Murdoch’s rival to GB News, but it’s here to challenge the big guns. It looks like a cross between ITV and Fox News. Morgan’s interview with Trump was fine, except that every line had been relentlessly trailed in recent days, so none of it was new. As launch nights go, it was a purring Rolls-Royce to GB News’ sputtering Robin Reliant. It’s clear that there are experienced people behind the scenes. Plenty of money, too. The production values are so slick, it feels like a channel that’s been running for years.”
Anita Singh, The Telegraph

“The show begins with a 15-minute monologue of quite awe-inspiring grandiloquence and disregard for the conventions of normal human debate. Rather than progressing his argument beyond the fact that, apparently, ‘it’s OK to go for a beer with someone you’ve just spent an hour arguing with’, Morgan takes aim again and again, at everyone from ‘Princess Pinocchio’ (Meghan Markle) to vegans. I won’t review Donald Trump; I’ll leave that to the historians. But what ensues is a truly tortured piece of broadcasting. Oscillating wildly between sycophantic and confrontational has always been Morgan’s style but Trump brings out the worst in him.”
Nick Hilton, The Independent

“How do you then position yourself as stern inquisitor to the Big Orange Liar, on telly, while suggesting the liberal establishment is silencing you both? As Danny Dyer so eloquently put it, this does my nut in. But satire died long ago, so it doesn’t matter that the set, the graphics and a section called “The World’s Gone Nuts” look like they were cut from Armando Iannucci’s news-show spoof The Day Today for being too lame”
Nick Curtis, Evening Standard