“Sarah Solemani’s adaptation of Jo Bloom’s novel grabbed the viewer by the chops from its startling opening scene, and held on until the closing credits” 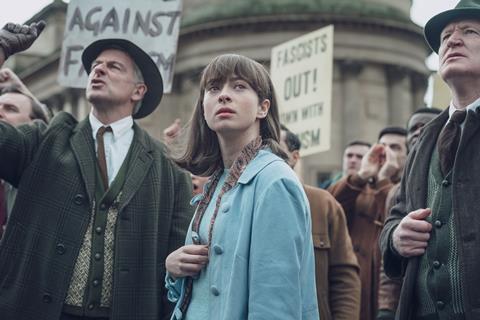 “Sarah Solemani’s adaptation of Jo Bloom’s novel grabbed the viewer (well, this one anyway) by the chops from its startling opening scene, and held on until the closing credits. As wrong-footing starts to a TV drama go, it was gripping. This is a thriller and a love story and, as Sunday night fare, like a sip of champagne after weeks of supermarket cola.”
Carol Midgley, The Times

“The swelling of national unrest, testy exchanges between rival protesters and, in particular, chilling scenes of little old ladies being galvanised to ‘take our country back’, all work to build an ominous backdrop to the compelling love affair. There was a fair amount of setting up to be done in this first episode, but the groundwork was more than effectively laid for what should be a gripping and exceedingly tense series.”
Rachel Sigee, The i

“The fertile ground in which the seeds of antisemitism and assorted other bigotries flourish is well evoked. The London parts, however, have a much broader-brush feel to them. The romance element feels awkward and unconvincing. The direction feels strangely stilted and the dialogue flimsy, the script never quite first-class. Still, even if you might wish it exhibited a bit more complexity and artistic refinement, it is a drama with resonance. It has the right story to tell – alas – in our current dark age.”
Lucy Mangan, The Guardian

“All the ingredients are there: a fascinating period of British history, a contemporary resonance, and a lovely lead performance from an actress in her debut role. But the end product is curiously bland. About 20 minutes in, I wondered if I had missed the first episode and was mistakenly watching the second.”
Anita Singh, The Telegraph

“Even though the subject of this series is basically global nooky, with Attenborough on words and the BBC’s Natural History Unit on visuals it was transcendent. It’s worth repeating that even in the age of Netflix and TV budgets bigger than small nation states, nobody does it better than the BBC. If there’s a sense that after Life on Earth, Planet Earth and The Blue Planets everything you could possibly want to know about life itself has been covered, then The Mating Game showed that it hasn’t – there’s always another angle.”
Benji Wilson, The Telegraph

“Unlike the environmentalist angle of Attenborough’s recent work, which has highlighted the human race’s complicity in our planet’s decline, this was a return to more straightforward nature programming: sumptuous camerawork, a stirring score and a warm, witty script delivered in the most comforting tones on the planet. As always, this was stunning film-making packed with awe-inspiring moments but it perhaps missed a trick not to juxtapose more starkly the natural world’s ceaseless determination to prosper against humanity’s apparent resolution to destroy it.”
Rachel Sigee, The i